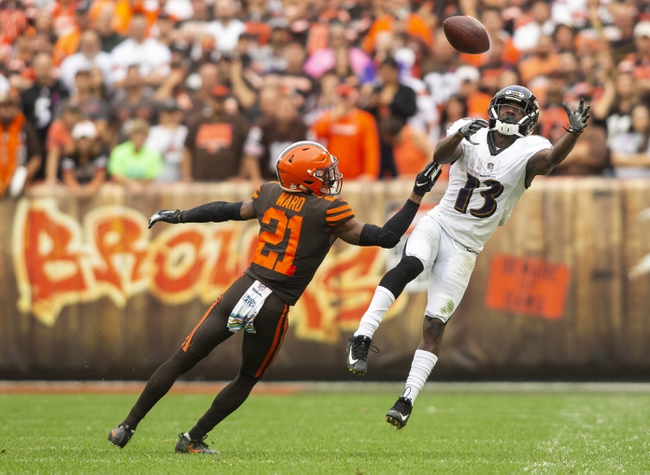 The Cleveland Browns and the Baltimore Ravens meet in a week 17 AFC North division matchup from M&T Bank Stadium in NFL action on Sunday afternoon.

The Cleveland Browns will look to finish above .500 for the first time since 2007 after winning 3 in a row to improve to 7-7-1 with a 26-18 win over Cincinnati in their last outing. Baker Mayfield has thrown for 3,349 yards, 24 touchdowns and 11 interceptions on 64.6% passing, while Nick Chubb has rushed for 972 yards and 8 touchdowns this season. Jarvis Landry leads the Browns with 76 catches for 874 yards with 3 touchdowns while David Njoku has 53 grabs for 577 yards and Antonio Callaway has 39 catches for 507 yards with each logging 4 touchdown catches this season. Defensively, Myles Garrett leads Cleveland with 12.5 sacks while Damarious Randall has 69 tackles this season. As a team, Cleveland is averaging 364.9 yards of total offense and 22.3 points per game this season.

The Baltimore Ravens will look for a win here to clinch their first division crown since 2012 after improving to 9-6 with a 22-10 win over the Los Angeles Chargers in their last outing. Lamar Jackson has thrown for 1,022 yards, 6 touchdowns and 3 interceptions on 58.2% passing while also rushing for 605 yards and 3 touchdowns. Gus Edwards leads Baltimore with 642 rushing yards while John Brown leads Baltimore’s receiving corps with 708 receiving yards and 5 touchdowns. Willie Snead IV has 61 grabs for 626 yards while Michael Crabtree has 52 catches for 587 yards and 3 touchdowns this season. Defensively, Za’Darius Smith leads the Ravens with 8.5 sacks while Matthew Judon and Terrell Suggs each have 7 sacks and C.J. Mosley has a team-high 67 tackles this season. As a team, Baltimore is averaging 369.1 yards of total offense, including the 2nd-most rushing yards per game in the league with 143 per contest to go along with 24.2 points per game this season. The Ravens are also stout defensively, sitting top-5 in total yardage against (284.1 YPG/1stin NFL), passing yardage against (198.9 YPG/4th), rushing yards (85.1 YPG/3rd) and scoring defense (17.5 PPG/1st) this season.

Both of these teams have a lot on the line in this game, Cleveland is eliminated, but the Browns can finish above .500 which is huge considering a lot of the fanbase probably thought the team was a couple of years away from a .500 or better season, while it’s win and you’re in for the Ravens. However, I think the Ravens will be playing this game tight and will just be playing win by any means necessary. 5 of Cleveland’s 7 road games this year have been an outright win or decided by 3 points or less, and the first meeting between the two went to overtime. I think we see another tight affair throughout so I’ll take the points with the Browns here.