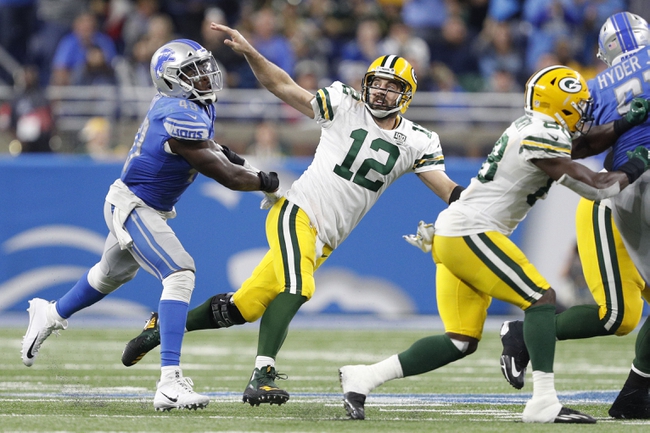 The Detroit Lions and the Green Bay Packers meet in a week 17 NFC North division matchup from Lambeau Field in NFL action on Sunday afternoon.

The Detroit Lions will look to finish their season on a high note after losing 4 of their last 5 games following a 27-9 loss to Minnesota in their last outing. Matthew Stafford has thrown for 3,511 yards, 19 touchdowns and 11 interceptions on 66.3% passing while Kerryon Johnson has rushed for a team-high 641 yards and 3 touchdowns while LeGarrette Blount has racked up 403 yards rushing with 5 touchdowns this season. Kenny Golladay leads the Lions’ receiving corps with 70 catches for 1,063 yards and 5 touchdowns this season. Defensively, Romeo Okwara leads Detroit with 7.5 sacks and Devon Kennard has 7 sacks while Jarrad Davis has 5 sacks and a team-high 68 tackles this season. As a team, Detroit is averaging 322.3 yards of total offense and 19.5 points per game this season.

The Green Bay Packers will be looking to find some consistency after alternating wins and losses in each of their last 4 games, including a 44-38 overtime win over the New York Jets in their last outing. Aaron Rodgers has thrown for 4,416 yards, 25 touchdowns and 2 interceptions on 62.3% passing while Aaron Jones has rushed for 728 yards and 8 touchdowns this season. Davante Adams leads the Packers in receiving with 111 catches for 1,386 yards and 13 touchdowns while Jimmy Graham has 52 catches for 615 yards this season. Defensively, Kyler Fackrell leads the Pack with 9.5 sacks while Blake Martinez has 5 sacks and a team-high 86 tackles this season. As a team, Green Bay is averaging 382 yards of total offense and 25.1 points per game this season.

Both of these teams are realistically playing for pride in this game, but the Packers have been out of it for a while and still racked up 44 points last week. The Lions just look defeated and while Detroit has played well on the road, they haven’t had a lot of luck at Lambeau Field, so I’ll side with Green Bay to end their season with a statement win, covering the spread in the process.