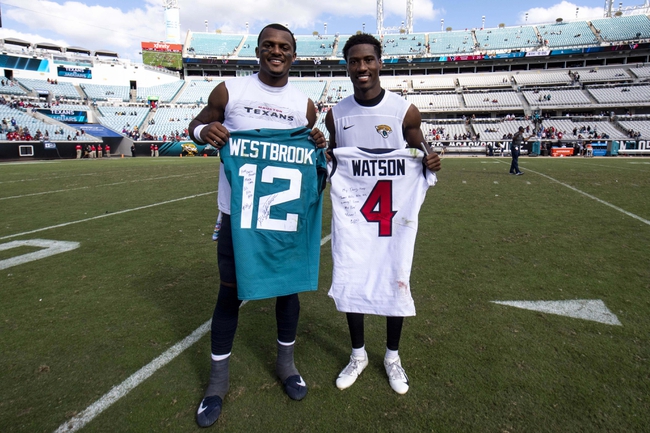 The Houston Texans need a victory here in order to keep their hopes of a top-two seed alive. The Houston Texans have won five of their last six home games. Deshaun Watson is completing 68.1 percent of his passes for 3,931 yards, 26 touchdowns and nine interceptions. Watson has two or more touchdown passes in 13 of his last 20 games. DeAndre Hopkins and Ryan Griffin have combined for 1,722 receiving yards and 11 touchdowns while Keke Coutee has 28 receptions. The Houston Texans ground game is averaging 125.8 yards per contest, and Lamar Miller leads the way with 917 yards and four touchdowns. Defensively, Houston is allowing 20.9 points and 358.1 yards per game. Zach Cunningham leads the Houston Texans with 101 tackles, J.J. Watt has 14.5 sacks and Justin Reid has three interceptions.

The Jacksonville Jaguars have a chance to win back-to-back games for the first time since the first two weeks of the season, and five of their last six losses have been decided by six or less points. The Houston Texans need a victory here to give themselves any shot of getting the second seed in the AFC, and they're outscoring teams by 12.25 points in their last four home games. The Jacksonville Jaguars have covered eight of their last nine games when an underdog of at least seven points. The Houston Texans are 2-7-1 ATS in their last 10 games when a favorite of at least seven points. The Texans beat the Jags by 13 points earlier this season, and that was before the Jagaurs were awful and the Texans were stringing together victories. The Texans have been a much more consistent home team since their bye week and have the offensive firepower to pull away from the Jaguars, regardless of who plays quarterback. I'll take the Texans in a double-digit victory.