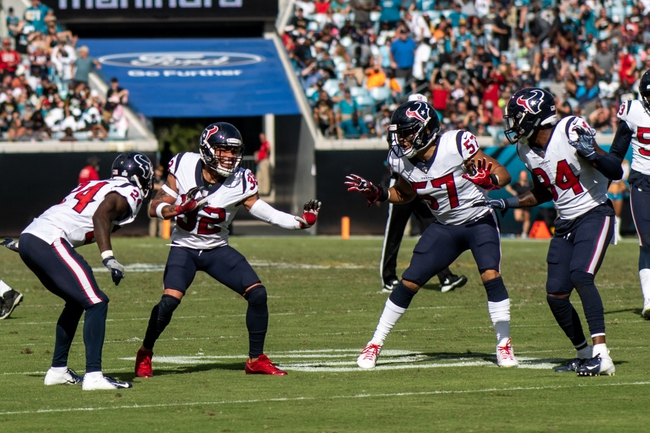 The Jacksonville Jaguars and the Houston Texans meet in a week 17 AFC South division matchup from NRG Stadium in NFL action on Sunday afternoon.

The Houston Texans will look for a win to lock up their division after falling to Philadelphia by a final score of 32-30 in their last outing. Deshaun Watson has thrown for 3,931 yards, 26 touchdowns and 9 interceptions on 68.1% passing while Lamar Miller has rushed for a team-high 917 yards and 4 touchdowns. DeAndre Hopkins leads Houston’s receiving corps with 103 catches for 1,425 yards and 11 touchdowns this season. Defensively, J.J. Watt leads the Texans with 14.5 sacks while Jadeveon Clowney has 9 sacks and Tyrann Mathieu leads the Houston defense with 69 tackles this season. As a team, Houston is averaging 364 yards of total offense and 25.5 points per game this season.

The Jaguars have had a lot of success against the Texans, but a lot of those came when these two teams were on the same level or the Jaguars ahead. Houston’s receiving corps has been decimated due to injury, but it hasn’t stopped the Texans from winning football games or still putting up solid offensive showings in a losing effort. The Texans also have a slim chance at the top seed in the conference with a lot of help, and could clinch a first round bye, but first and foremost, the Texans clinch the division with a win here. I just think the Jaguars are ready for the season to end, so I’ll lay the points with the Texans in this spot.