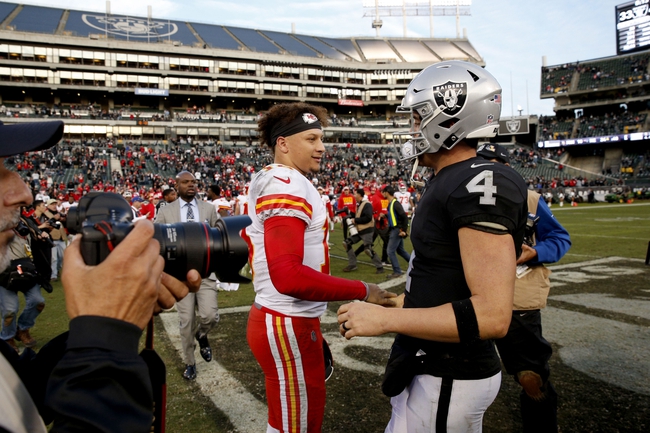 The Oakland Raiders look to play spoiler after splitting their last six games. The Oakland Raiders have lost six of their last seven road games. Derek Carr is completing 68.5 percent of his passes for 3,864 yards, 19 touchdowns and eight interceptions. Carr has one or less touchdown passes in 10 of his last 15 games. Jared Cook and Jordy Nelson have combined for 1,529 receiving yards and nine touchdowns while Jalen Richard has 66 receptions. The Oakland Raiders ground game is averaging 100.1 yards per contest, and Doug Martin leads the way with 623 yards and four touchdowns. Defensively, Oakland is allowing 28.8 points and 379.5 yards per game. Tahir Whitehead leads the Oakland Raiders with 117 tackles, Maurice Hurst has four sacks and Marcus Gilchrist has three interceptions.

The Oakland Raiders are coming off probably their best game of the season in a blowout win over the Denver Broncos, but they're being outscored by an average of 15 points in their last four road games. The Kansas City Chiefs need a victory here to lockup the top seed in the AFC, but six of their last eight games have resulted in either a loss or a victory of seven or less points. The Oakland Raiders have split their last 10 games ATS when a double-digit underdog. The Kansas City Chiefs have failed to cover five of their last six games when a double-digit favorite. The Raiders hung around with the Chiefs in the meeting earlier this season and AFC West games overall usually are tight. I'm just not looking to lay double-digit chalk with a Kansas City team that's been shaky recently and continues to getgashed defensively. There's better games on Sunday's card, but if forced to pick, I'd want the Raiders and the boatload of points.