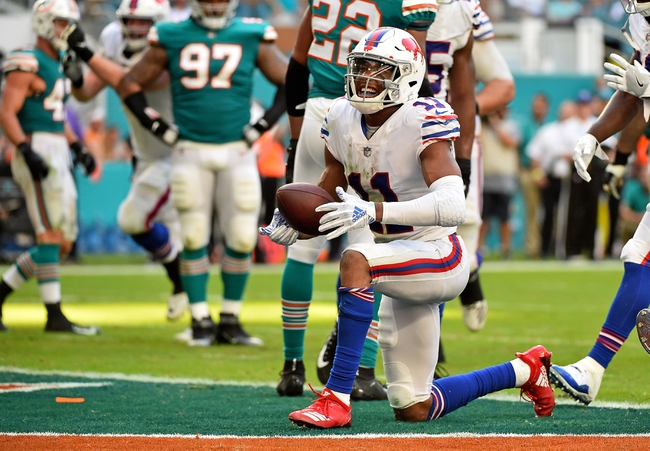 The Miami Dolphins look to snap a two-game skid and prevent finishing the year with a losing record. The Miami Dolphins have lost each of their last six road games. Ryan Tannehill is completing 65 percent of his passes for 1,832 yards, 17 touchdowns and seven interceptions. Tannehill has two or more touchdown passes in six of his last nine games. Kenny Stills and Danny Amendola have combined for 1,075 receiving yards and seven touchdowns while Kenyan Drake has 48 receptions. The Miami Dolphins ground game is averaging 112.6 yards per contest, and Frank Gore leads the way with 722 yards on 156 carries. Defensively, Miami is allowing 26.1 points and 391.7 yards per game. Kiko Alonso leads the Miami Dolphins with 120 tackles, Robert Quinn has 6.5 sacks and Xavien Howard has seven interceptions.

The Buffalo Bills look to end the season with a victory after splitting their last six games. The Buffalo Bills have split their last six home games. Josh Allen is completing 51.7 percent of his passes for 1,850 yards, seven touchdowns and 11 interceptions. Allen has one or less touchdown passes in 10 of his 11 career games. Zay Jones and Robert Foster have combined for 1,079 receiving yards and seven touchdowns while Jason Croom has 20 receptions. The Buffalo Bills ground game is averaging 124.7 yards per contest, and Allen leads the way with 536 yards and six touchdowns. Defensively, Buffalo is allowing 23.8 points and 298.7 yards per game. Tremaine Edmunds leads the Buffalo Bills with 109 tackles, Lorenzo Alexander has 6.5 sacks and Jordan Poyer has four interceptions.

The Miami Dolphins have been god awful on the road this season and are being outscored by an average of 17.6 points during their six-game road losing streak. The Buffalo Bills are losing, but they continue to play hard ever week and five of their last six games have resulted in either a victory or a loss by single digits. The Miami Dolphins have failed to cover six of their last nine games when an underdog of at least three points. The Buffalo Bills are 4-4-1 ATS in their last nine games when a favorite of at least three points. We saw the Dolphins quit last week against a bad Jacksonville Jagaurs side, and now there's rumblings of Tannehill and management not being around next year. The Dolphins couldn't care less about this game that's sure to be freezing. The Buffalo Bills play hard and were a dropped Charles Clay pass away from beating the Dolphins earlier this season. I'll take the Bills by a touchdown.