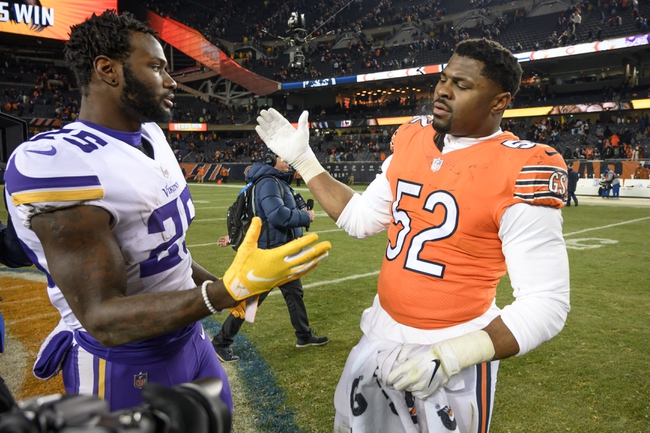 The Chicago Bears look to keep the ball rolling after winning eight of their last nine games. The Chicago Bears have won four of their last six road games. Mitchell Trubisky is completing 66.4 percent of his passes for 3,060 yards, 24 touchdowns and 12 interceptions. Trubisky has two or more touchdown passes in seven of his last 10 games. Tarik Cohen and Allen Robinson have combined for 1,471 receiving yards and nine touchdowns while Taylor Gabriel has 63 receptions. The Chicago Bears ground game is averaging 117.9 yards per contest, and Jordan Howard leads the way with 826 yards and seven touchdowns. Defensively, Chicago is allowing 18.2 points and 308.7 yards per game. Roquan Smith leads the Chicago Bears with 116 tackles, Khalil Mack has 12.5 sacks and Kyle Fuller has seven interceptions.

The Chicago Bears still have an outside chance of getting a top-two seed in the NFC and have a defense that's allowing an average of 10.6 points during their three-game winning streak. The Minnesota Vikings need a victory if they're going to make the playoffs, and each of their last six wins have been decided by seven or more points. The Chicago Bears are 7-2-1 ATS in their last 10 games when an underdog of at least three points. The Minnesota Vikings have covered each of their last five games when a favorite of at least three points. Those who have followed me over the years know I'm all about value and don't necessarily make picks simply based on how I think the game will play out. If I can get free points with a team capable of winning the game outright, I usually take it, even if I think the outcome will go the other way. The Bears are Super Bowl good, while the Vikings have been hit or miss and are just now starting to play well. We're getting five points with a Bears team that doesn't allow anything easy and three of their four losses have been decided by three or less points. I have to take the points.