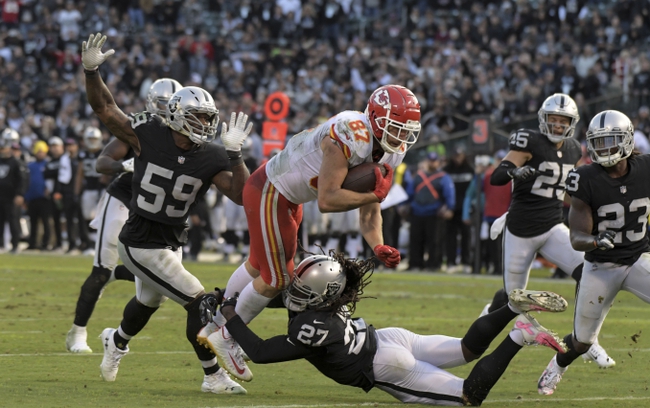 The Oakland Radiers and the Kansas City Chiefs will meet up in Week 17 NFL action on Sunday.

The Raiders enter this game at 4-11 overall. Oakland broke a string of losses with a December 9 win over the Steelers, then fell to the Bengals before picking up another win versus the Broncos this past week.

In the Broncos game, Oakland QB Derek Carr put up 167 yards passing, and Doug Martin led the rush with 107 yards and a TD. Tops in receiving was Jordy Nelson with 75 yards from seven grabs.

Over on the Chiefs’ side, they’re 11-4 this season. After stringing together a couple of wins over the Raiders and Ravens, KC has lost their last two outings versus the Chargers and the Seahawks.

In the Seahawks game, KC QB Pat Mahomes put up 273 yards and three touchdowns, and Damien Williams was the lead rusher with 103 yards. Tyreek Hill led the Kansas City receivers with his 74 yards on four grabs.

It’s no surprise that the Raiders have some work to do this off-season, but if there’s a silver lining here it’s that they’ve been playing better the last handful of games.

The last time the Chiefs and Raiders met, KC took a 40-33 road win. With the recent improvement in Oakland, I can see them eking out a cover on this thick line. Give me the Raiders.