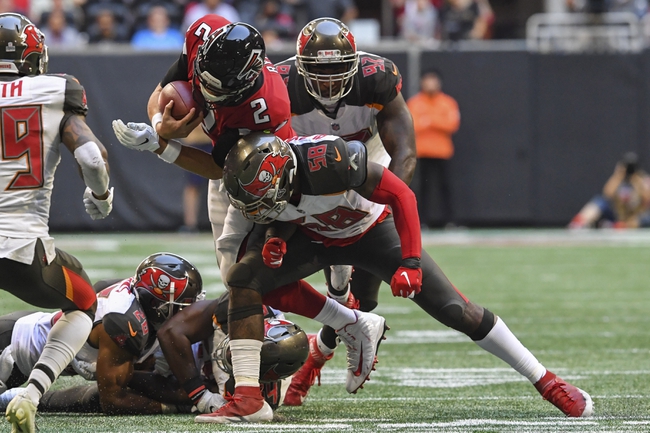 The Atlanta Falcons and the Tampa Bay Buccaneers will meet up in Week 17 NFL activity on Sunday.

The Falcons are sitting at 6-9 on the season. Following a pretty bad five-game losing streak, Atlanta has won their last two outings versus the Cardinals and the Panthers.

In the Carolina game, Falcons QB Matt Ryan managed 239 yards with three touchdowns, and Brian Hill put up 115 yards on eight carries. Calvin Ridley was the top Atlanta receiver with 90 yards and a score on three grabs.

Over on the Buccaneers’ side, they’re 5-10 this year. Tampa won a couple of consecutive games versus the 49ers and Panthers, but have since dropped to the Saints, Ravens and Cowboys.

In the Dallas game, Tampa Bay’s Jameis Winston logged 336 yards and a TD, and Peyton Barber led the rush on 43 yards from 17 carries. Mike Evans led the Buccaneers receivers with his 90 yards and a TD from six catches.

Atlanta has looked pretty good in their last couple of games, but part of that is due to the fact that they’ve played a couple of bad teams.

Speaking of bad teams, Tampa certainly qualifies, as the early-season promise they showed is completely gone. I like the Falcons to assert their superior talent and manage a cover here.