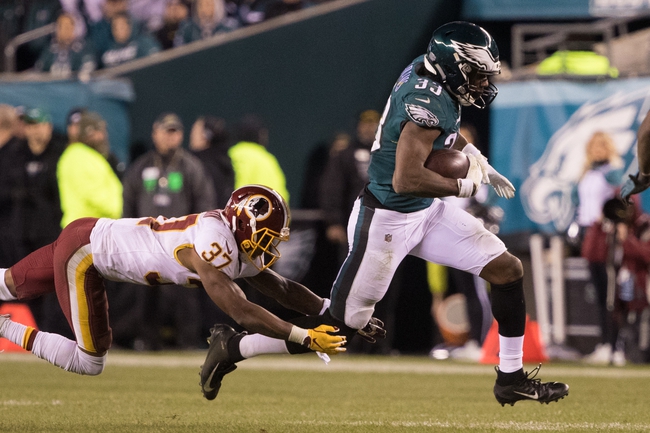 The Philadelphia Eagles and the Washington Redskins will meet up in Week 17 NFL action on Sunday.

Philadelphia enters this matchup at 8-7 on the year. The Eagles have won four of their last five games, beating the Giants, Redskins, Rams and Texans during that span.

In the Texans game, Philly QB Nick Foles put up 471 yards with four touchdowns and one pick, and Darren Proles was the lead rusher with 32 yards. Nelson Agholor led the Eagles receivers with his 116 yards and one touchdown, but Zach Ertz had a monster game as well with 12 catches for 110 yards and two TDs.

Over on the Redskins’ side, they’re 7-8 on the season. Washington has dropped five of their last six games, falling to the Texans, Cowboys, Eagles, Giants and Titans during that time.

In the Titans game, Redskins QB Josh Johnson put up 153 yards, one TD and two picks, and Adrian Peterson had a nice outing with 119 yards rushing. Jamison Crowder was the top Redskins receiver with his 78 yards from five grabs.

The Eagles were written off for dead not that long ago, and they’re making a late-season surge that has a lot of people talking. Philly has dispatched two playoff-level teams in their last pair of games, and it seems they’re heating up at the right time. I’m going to stick with the Eagles for the cover here.