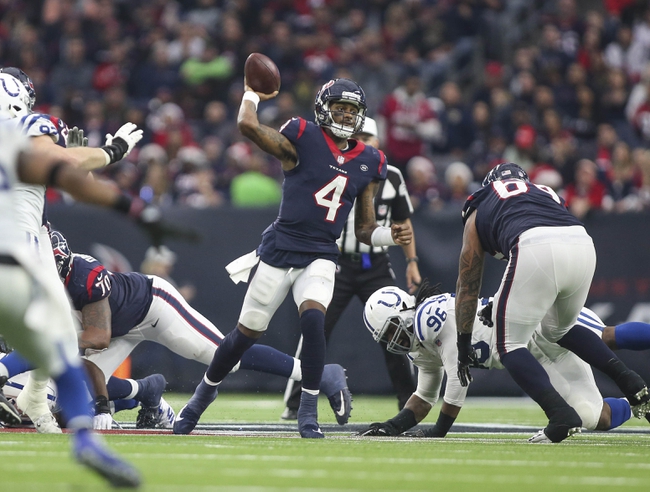 The Houston Texans have won 11 of their last 13 games and are in the playoffs for the fifth time in the last eight years. The Houston Texans have won six of their last seven home games. Deshaun Watson is completing 68.3 percent of his passes for 4,165 yards, 26 touchdowns and nine interceptions. Watson has two or more touchdown passes in 13 of his last 21 games. DeAndre Hopkins and Ryan Griffin have combined for 1,877 receiving yards and 11 touchdowns while Keke Coutee has 28 receptions. The Houston Texans ground game is averaging 126.3 yards per contest, and Lamar Miller leads the way with 973 yards and five touchdowns. Defensively, Houston is allowing 19.8 points and 343.1 yards per game. Zach Cunningham leads the Houston Texans with 107 tackles, J.J. Watt has 16 sacks and Justin Reid has three interceptions.

The Indianapolis Colts head into the playoffs with a ton of momentum, as they've won nine of their last 10 games and are outscoring teams by an average of 10.75 points during their four-game winning streak. The Houston Texans finished with an 11-5 record despite starting the season with three straight losses, and they're outscoring teams by an average of 11.75 points in their last four home games since their bye week. The Indianapolis Colts have split their last eight games ATS when an underdog of any kind. The Houston Texans are 4-4-1 ATS in their last nine games when a favorite of any kind. The two meetings between the Colts and Texans this season were decided by three points each, with the home team winning both games. The last eight meetings between these division rivals have split down the middle and the home team has won seven of the last 10 meetings. The Texans were my Super Bowl pick before the season started, and while the Colts are on fire right now, they're simply the more balanced team in this contest. The Colts defense has improved and they actually have a running game now, but the spread isn't high enough for me to back them. Getting the Texans just under a field goal is where the value is at, as they've been the more cosnsitent team over the course of the season on both sides of the ball.