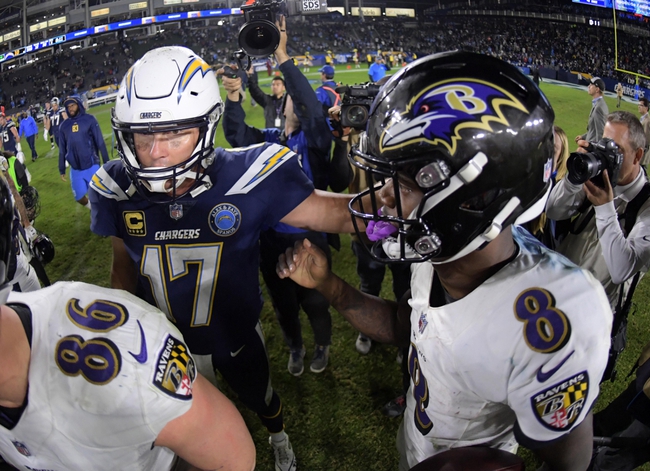 The Baltimore Ravens have won six of their last seven games and are in the playoffs for the first time since the 2014 season. The Baltimore Ravens have won each of their last four home games. Lamar Jackson is completing 58.2 percent of his passes for 1,201 yards, six touchdowns and three interceptions. Jackson enters his first career playoff game with 170 career pass attempts under his belt. John Brown and Willie Snead IV have combined for 1,366 receiving yards and six touchdowns while Michael Crabtree has 54 receptions. The Baltimore Ravens ground game is averaging 152.6 yards per contest, and Gus Edwards leads the way with 718 yards and two touchdowns. Defensively, Baltimore is allowing 17.9 points and 292.9 yards per game. C.J. Mosley leads the Baltimore Ravens with 105 tackles, Za'Darius Smith has 8.5 sacks and Brandon Carr has two interceptions.

The Los Angeles Chargers have won seven straight non-home games when you include their trip to London, and they're outscoring teams by an average of eight points in their last five road games since their bye week. The Baltimore Ravens have lost one game since making the move to Lamar Jackson full time, and they're outscoring teams by an average of 7.3 points during their three-game winning streak. The Los Angeles Chargers have covered seven of their last 10 games when an underdog of any kind, which includes outright victories in their last four games. The Baltimore Ravens have failed to cover six of their last seven games as a favorite of any kind. The Ravens are an old school football team that's built for playoff success with an impressive ground game and defense. The problem is the Ravens have a limited passing attack and you have to be afraid if they get down early, how the hell they're going to get back into the game. Eight of the Ravens last 12 games have resulted in either a loss or a victory by eight or less points. Yes, the Ravens bullied the Chargers a few weeks ago, but that's also film for LA to work with and figure out how to get some of their weapons to be productive against this defense. The Los Angeles Chargers are as balanced of a team you're going to find and they actually play better on the road. No matter how you slice it, the Chargers are the better team from top to bottom. You'll make money in this business by taking the better team and free points. Give me the Chargers in a game they could and probably should win outright.