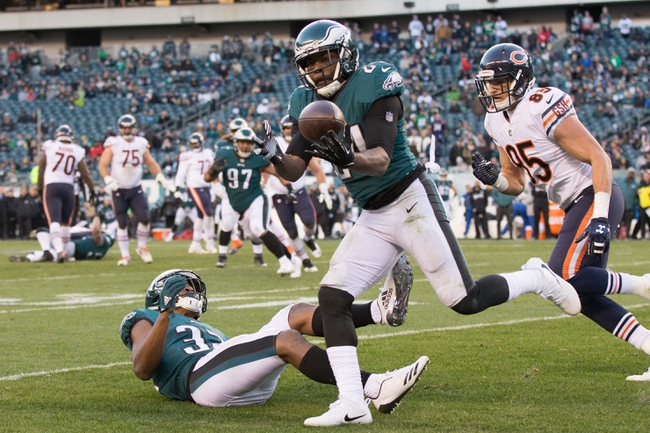 The Philadelphia Eagles and the Chicago Bears will meet up on Sunday in NFL Wild Card Playoff action.

The Eagles finished up the regular season at 9-7. Philly dropped a tough OT game to Dallas on December 9 but since they’ve taken out the Rams, Texans and Redskins to sneak into a playoff appearance.

In the Redskins game, Eagles QB Nick Foles put up 221 yards with two TDs and a pick, while Wendell Smallwood led the rush with 53 yards. Alshon Jeffrey led the Eagles receivers with five catches for 59 yards and a TD.

Over on the Bears’ side, they finished the regular season at 12-4. Following a shocking OT loss to the Giants, Chicago has rattled off wins over the Rams, Packers, 49ers and Vikings in their last four games.

In the Vikings game, Chicago QB Mitch Trubisky put up 163 yards on 18 completions, and Jordan Howard managed 109 yards and two TDs on the ground. Taylor Gabriel came up with four catches for 61 yards to lead the Chicago receivers.

The Bears are a trendy Super Bowl pick this year, as they’ve got a solid defense that can tame some of the most dynamic squads in the league. The offense isn’t necessarily dominant, but if you’re that dynamic on the other side of the ball you don’t need to throw up a ton of points every single week.

As for Philly, they’re getting hot at just the right time and are a major success story this season after all their adversity and injury.

Still, I don’t think the Eagles will be able to navigate that Bears defense, so I’m likely going to stick with Chicago in what should be an intense and fun-to-watch game.