Who Has The Most Receiving Yards In NFL History? 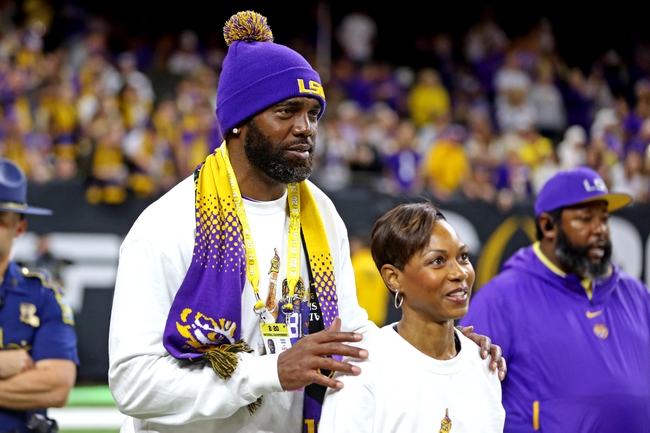 Top-10 Players With Most Receiving Yards In NFL History

Receivers are some of the most glorified players in the NFL outside of quarterbacks, and receiving yards is one of the easiest ways to judge their play. A lot of it has to do with situation such as the quarterback throwing the ball, but either way, seven of the top-10 receiving yards leaders are in the NFL Hall of Fame at the time this article was posted.

Here are the 10 receivers with the most receiving yards in NFL history.

1. Jerry Rice, 22,895 - Jerry Rice is widely considered the best receiver of all-time, and he led the NFL in receiving yards six different seasons. Rice and his 1,848 receiving yards back in 1995 was a single-season league record for 17 years. Rice topped 1,000 receiving yards 14 times, which is an NFL record in itself.

2. Larry Fitzgerald, 17,083 - Larry Fitzgerald has played in at least 13 games in all 16 seasons and has surpassed 1,000 receiving yards nine different times. Keep in mind Fitzgerald has dealt with a lot of poor quarterbacks throughout his career, so he could have easily threatened the top spot if he was in a better situation.

3. Terrell Owens, 15,934 - Terrell Owens never led the league in receiving yards, but he’s had more than 1,000 receiving yards nine times in his career and is the only player in NFL history with a 200-yard receiving game with three different teams. Owens is also second all-time on the San Francisco 49ers receiving yard list with 8,572 yards.

6. Tony Gonzalez, 15,127 - Tony Gonzalez is unique given that he’s the only tight end on this list and is somebody who helped change the position forever. Gonzalez had more than 1,000 receiving yards four times in his career and holds the Kansas City Chiefs all-time record with 10,940 receiving yards.

7. Tim Brown, 14,934 - Tim Brown topped 1,000 receiving yards every single season from 1993 to 2001. It took Brown a few years to get his career off the ground, but he didn’t slowdown once it was in motion. Brown holds the Los Angeles / Oakland Raiders all-time record with 14,734 receiving yards.