Which Colleges Have Produced The Most NFL Players? 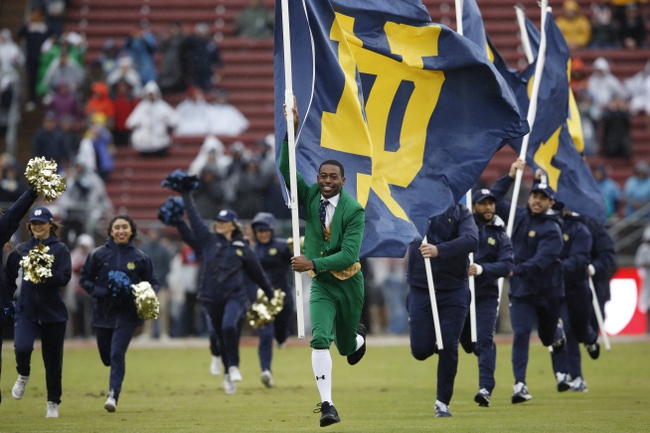 The Schools That Have The Most NFL Players

A lot of college football fans brag about winning conference and national titles, but getting players to the next level is also a massive accomplishment and something these top recruits look at when picking a school. There’s 22 schools that have given us 300-plus NFL players. Get winning College Football picks and College Football predictions for every game all season long at Sports Chat Place.

Here are the colleges that have produced the most NFL players of all-time.

1. Notre Dame, 592 players - Notre Dame has given us one of the top quarterbacks of all-time in Joe Montana, two 10,000-yard rushers in Jerome Bettis and Ricky Watters, and one of the most productive receivers of all-time in Tim Brown. Defensively, sack artists Bryant Young and Justin Tuck came over from the Irish, as well as defensive backs Dave Waymer and Bobby Taylor. You certainly can’t forget about defensive tackle Alan Page. Notre Dame has produced 13 NFL hall of fames, which is tied for the most with USC.

2. USC, 526 players - Speaking of USC, the Trojans end up second on this all-time list. Carson Palmer is the most successful quarterback from USC, while this school gave us two of the top running backs ever in Marcus Allen and OJ Simpson. USC produced an impressive trio of wide receivers in Keyshawn Johnson, Curtis Conway and Lynn Swann, and there’s an endless list of defensive players from Ronnie Lott, Willie Wood, Clay Matthews, Bruce Matthews, Willie McGinest, Everson Griffen, Junior Seau and Dennis Smith. The tradition of USC runs deep.

4. Michigan, 406 players - The Michigan Wolverines produced the greatest quarterback ever in Tom Brady. That’s a feather in the cap from jump street. Other offensive players include quarterbacks Jim Harbaugh and Brian Griese, as well as wide receivers Amani Toomer, Anthony Carter and Elroy Hirsch. Defensively, Michigan has one of the best defensive backs ever in Charles Woodson, a sack master in Trevor Pryce, and Dave Brown and Ty Law, who combined for 115 interceptions.

5. Penn State, 402 players - Penn State doesn’t have a standout offensive player outside of Franco Harris, but there’s some productive players in the bunch such as quarterback Kerry Collins, and receivers Bobby Engram, Mickey Shuler and OJ McDuffie. The Nittany Lions are known for their success on the defensive side, as Cameron Wake, Tamba Hali, Jack Ham, Darren Perry, Paul Posluszny and NaVorro Bowman all suited up in Happy Valley.

6. LSU, 385 players - LSU isn’t known for its quarterback success, but it does have a Hall of Fame single caller in Y.A. Tittle on its resume. One of the games best fullbacks in Jim Taylor went to LSU, and there’s a bunch of great receivers in Eddie Kennison, Eric Martin, Charley Hennigan, as well as Odell Beckham and Jarvis Landry. Defensively, LSU produced ballhawk Johnny Robinson, and sack masters Henry Thomas, Leonard Marshall and Danielle Hunter.

7. Alabama, 382 players - Alabama has four quarterbacks who have topped 20,000 passing yards in Ken Stabler, Joe Namath, Brett Starr and Richard Todd. There’s some solid running backs to come from Bama in Shaun Alexander, Mark Ingram and Derrick Henry, and a trio of wide receivers Julio Jones, Ozzie Newsome and Don Hutson isn’t too shabby. Defensively, it doesn’t get much better than a linebacker combination of Derrick Thomas and Cornelius Bennett, while DeMeco Ryans, DeMeco Ryans and Lee Roy Jordan also played for the Crimson Tide.

8. Nebraska, 379 players - Nebraska has a solid pair of running backs in Ahman Green and Roger Craig, while the Cornhuskers also produced one of the best wide receivers in Irving Fryar. Defensively the list includes defensive back Pat Fischer, defensive linemen Neil Smith, Ndamukong Suh, Kyle Vanden Bosch and linebacker Lavonte David. Nebraska also has one of the best offensive lineman ever in Will Shields, who was a 12-time Pro Bowler and Hall of Famer.

9. Oklahoma, 378 players - Oklahoma has one of the best quarterbacks ever in Troy Aikman and one of the best running backs ever in Adrian Peterson. Throw wide receiver Tommy McDonald in that mix and the Sooners could have the best QB-RB-WR trio in school history. Defensively, the Sooners gave us defensive back Bobby Boyd, defensive tackle Gerald McCoy and linebacker Curtis Lofton. However, Oklahoma has just three NFL Hall of Famers, which is the fewest of any school on this list.