Who Are the NFL Players with the Most Sacks in a Season? 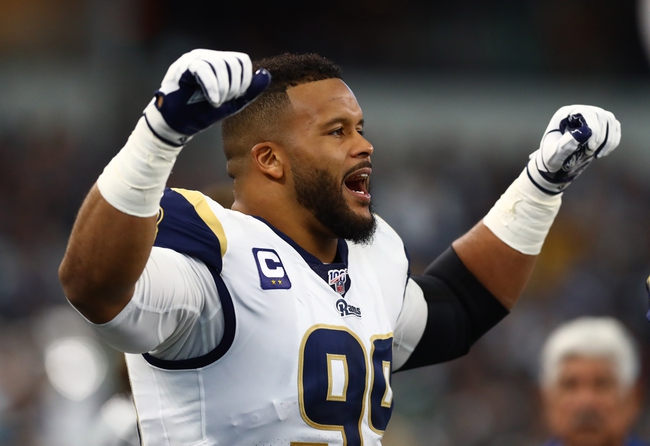 The NFL Defensive Players with the Most Sacks in a Season

When the NFL began counting sacks as an official statistic in the 1982 season, defensive pass rushers finally got their proper respect. A big sack can help seal a win or steal a victory, and the best NFL players have made an art of taking down the quarterback for a loss. Get Free NFL Picks and NFL Predictions for every game all season long at Sports Chat Place.

These are the NFL defensive players with the most sacks in a season.

1. Michael Strahan, New York Giants, 22.5 (2001) - Strahan is a New York legend (he spent his entire 15-year career with the Giants), and stands alone atop the NFL’s season sacks list. Among his many accomplishments are seven Pro Bowls, a Defensive Player of the Year award in 2001, a Super Bowl XLII victory and membership in the Hall of Fame. Strahan managed 141.5 total sacks across his decorated career.

2. Justin Houston, Kansas City Chiefs, 22.0 (2014) - We’ve got a three-way tie for second place on the sacks list, and we’ll start with Houston. At 6 ft 3 in and 270 pounds, he can run over just about anybody on the planet. Houston came into the NFL after proving himself at the University of Georgia, where he finished second in the SEC in sacks during his junior year.

2. Jared Allen, Minnesota Vikings, 22.0 (2011) - Allen spent time with the Chiefs, Vikings, Bears and Panthers during his career, putting up great sack numbers everywhere he went. Though he only played in one Super Bowl, Allen’s numbers are still really impressive, with five Pro Bowl selections, 136.0 career sacks and a record four career safeties.

2. Mark Gastineau, New York Jets, 22.0 (1984) - Gastineau is beloved among Jets fans, as he spent his entire NFL career with the team and was part of the “New York Sack Exchange.” He was a five-time Pro Bowler, a two-time sacks leader and is a member of the New York Jets Ring of Honor. Gastineau racked up 74.0 sacks in 137 career games.

5. Chris Doleman, Minnesota Vikings, 21.0 (1989) - During an NFL career that spanned from 1985 to 1999, Doleman was a perennial force on the defensive line. He spent time with the Vikings, Falcons, 49ers and Vikings, racking up eight Pro Bowls, 150.5 sacks, eight interceptions and three touchdowns. Doleman was added to the Hall of Fame in 2012, but sadly passed away at 58 in January of 2020.

5. Reggie White, Philadelphia Eagles, 21.0 (1987) - The most incredible thing about White’s 21-sack season in 1987 is that he pulled off the feat in just 12 games due to an NFLPA strike (everyone else on the top season sacks list had 16 games). The Hall-of-Famer White is one of the all-time NFL greats, selected to 13 Pro Bowls and winning Super Bowl XXXI with the Packers.

7. Aaron Donald, Los Angeles Rams, 20.5 (2018) - Donald jumped right into the NFL fray during his rookie season in 2014 and got better as the years went by. After signing a gigantic new contract in 2018, Donald proved his worth with a 20.5-sack season and his second consecutive NFL Defensive Player of the Year award.

7. JJ Watt, Houston Texans, 20.5 (2014) - Watt signed a six-year contract extension with the Texans prior to the 2014 season (worth a whopping $100 million) and promptly went to work showing Houston what a great deal they got. In addition to his 20.5 sacks, in 2014 Watt also set a record for the longest interception return by a defensive lineman (80 yards).

7. Lawrence Taylor, New York Giants, 20.5 (1986) - We’ll finish off the NFL season sacks list with another Giants legend in Taylor. He played for New York his entire career (1981-1993), bringing home two Super Bowl wins, 10 Pro Bowl selections, an MVP award (1986), a Defensive Rookie of the Year and a Hall of Fame selection. Taylor is also notable for making some very bad decisions in his personal life, but on the field he was one of the best NFL players of all time.

The pick in this article is the opinion of the writer, not a Sports Chat Place site consensus.
Previous Pick
Which Colleges Have Produced The Most NFL Players?
Next Pick
Will The Miami Dolphins Trade For LSU Quarterback Joe Burrow?