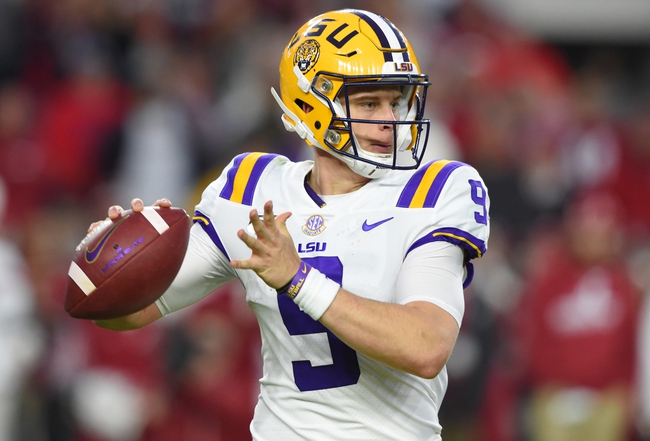 Will The Dolphins Trade For Joe Burrow In The 2020 NFL Draft?

We’re a month away from the 2020 NFL Draft and that means the rumor mill only heats up. One of the interesting things floating out there is that the Miami Dolphins really like LSU quarterback Joe Burrow and are considering putting together a trade package for the Cincinnati Bengals to move up from the fifth pick to the first overall pick to get him. The Dolphins have 14 selections in this draft, the most of any team, and three of those picks are in the first round. The ammo is there to get this thing done.

Should the Dolphins pull the trigger?

While football is a team sport and you need talent across the board to be successful, quarterback is head and shoulders the most important position. A team gets a franchise quarterback and that team is set for the next 15 to 20 years. You get the quarterback and figure the rest out later. No price is too steep. If it takes all three first round picks this year to move from five to one, so be it.

Just look at how the team down the road in the Miami Heat run their operation and why they’ve been so successful over the years. Pat Riley doesn’t give a damn about draft picks or young players with potential. He’s flipping everything to get the star, and its resulted in 20 years of competitive teams and three titles.

Football is obviously a deeper roster and assets mean a little more when trying to complete a 53-man team, but a potential star quarterback is the equivalent of getting a LeBron James or Jimmy Butler.

The Dolphins have spent decades playing things safe and living in a world of mediocrity. In fact, Ryan Tannehill is the only first round quarterback the Dolphins have drafted since selecting Dan Marino in 1983. Whether it was John Beck, Chad Henne, Pat White or Brandon Doughty, the Dolphins haven’t gone all in on the most crucial position to stop what has been an embarrassing and frustrating 21 years since Marino retired.

Heck, this is the same franchise that chose Daunte Culpepper over Drew Brees because they were scared of his shoulder injury. Granted, different regime than they have now, but it’s been the same song and dance no matter who’s called the shots.

The Dolphins may very well have to move up if they want to guarantee getting Tua Tagovailoa out of Alabama. And while Tagovailoa is extremely talented and would probably be the first overall pick if he wasn’t hurt, the problem is he’s coming off hip surgery and has proven to be injury prone even before that disturbing incident. Tagovailoa also had two procedures on both of his ankles at Alabama. Word is he’s healing fine and there’s recent video of him moving well and throwing, but if you have to give up something to get the quarterback with injury concerns, why not throw in a little something extra to get the more durable one?

Get the quarterback and worry about the cost later. If that’s Burrow or Tagovailoa, you do what it takes to close the deal.

The Dolphins seem to have finally found a coaching staff that knows what it’s doing and the front office guys have done a great job of spreading the wealth this offseason rather than overpaying for a wide receiver or defensive tackle. It’s important they continue on this path and treat the quarterback position differently as well.

The pick in this article is the opinion of the writer, not a Sports Chat Place site consensus.
Previous Pick
Who Are the NFL Players with the Most Sacks in a Season?
Next Pick
Who Has The Most Solo Tackles In A NFL Season?