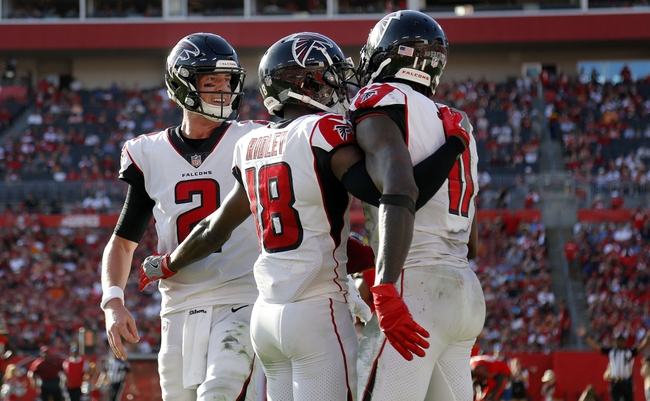 The Atlanta Falcons have been a disappointing bunch the last two years, winning a combined 14 games, so you can understand why oddsmakers are a bit skeptical and have their 2020 win total set at 7.5 wins. The Falcons have won seven or less games in four of their last seven seasons and coach Dan Quinn is winning just 53.8 percent of his games through five years. Get free NFL Picks and NFL Predictions for every game all season long at Sports Chat Place.

Will this be a turnaround season for the Falcons?

Subtractions: It looks like running back Devonta Freeman’s career is over with the Falcons, as he spent six years with the franchise, racking up nearly 4,000 rushing yards and 32 rushing touchdowns. Freeman will finish sixth in Falcons history in rushing yards and fourth in rushing touchdowns. Win receiver Austin Hooper is now with the Cleveland Browns after four years in Atlanta and 2,244 receiving yards and 16 receiving touchdowns. Leading tackler De'Vondre Campbell is in Arizona after four years in Atlanta where he produced 363 total tackles, 5.5 sacks, three interceptions and 16 pass deflections. Vic Beasley is in Tennessee after five years with the Falcons where he racked up 156 total tackles, 37.5 sacks, 11 forced fumbles, one interception and 12 pass deflections.

Additions: The Falcons added to their offense by bringing in tight end Hayden Hurst over from Baltimore and snagging running back Todd Gurley in a surprise free agent pickup. Hurst caught 43 passes in two years with the Ravens and Gurley has proven to be one of the best backs in the league as long as he can stay healthy. If Gurley’s knee is recovered and he can get back in that 2017 - 2018 form, this is a steal for the Falcons offense. The Falcons made a big splash on the defensive side by bringing in defensive end Dante Fowler, who is coming off his best season yet with 11.5 sacks and two forced fumbles with the Los Angeles Rams. Fowler has always had top tier pass rushing potential and at just 25 years old, it seems like he’s finally starting to tap into that potential.

Overall: This is a make or break season for the Falcons and certainly for coach Quinn. The Falcons have the talent to be a team that can get out of the NFC, and at the very least, they shouldn’t be struggling to get to seven wins and being a middle of the road team. The concern is that Falcons defense has been awful the last two years and Quinn is a defensive coach. It’s time to put up or shut up and if things don’t improve this season, I expect changes in Atlanta.

With that said, I’m siding with the over the win total.

I’ve believed in these Falcons the last few years, and while they’ve let me down, the talent is still there across the board. Matt Ryan should still have something left in the tank as he approaches 35 years old and the weapons are there in Calvin Ridley, Julio Jones and now Hurst and Gurley. The Falcons are still going to be a highly explosive offense.

Defensively, Fowler adds a much needed boost in the pass rushing department and it should allow Grady Jarrett to get more favorable matchups on the inside. I believe a lot of the Falcons defensive issues last season was due to a lack of pass rush, putting the secondary in tough spots to defend longer than needed. You can do a lot worse than a secondary of Keanu Neal, Ricardo Allen and Isaiah Oliver.

The Falcons are in a tough division and weren’t given many favors with road games against the Dallas Cowboys, Green Bay Packers, Kansas City Chiefs and Minnesota Vikings. However, the Falcons have the ability to be in that playoff conversation and they played well on the road last year, which included ending the season with four straight road wins.

I’m keeping my stock in the Falcons, but I must admit that leash is short.

The pick in this article is the opinion of the writer, not a Sports Chat Place site consensus.
Previous Pick
Who Has The Most Rushing Yards In NFL History?
Next Pick
Arizona Cardinals 2020 Win Total - NFL Pick, Odds, and Prediction