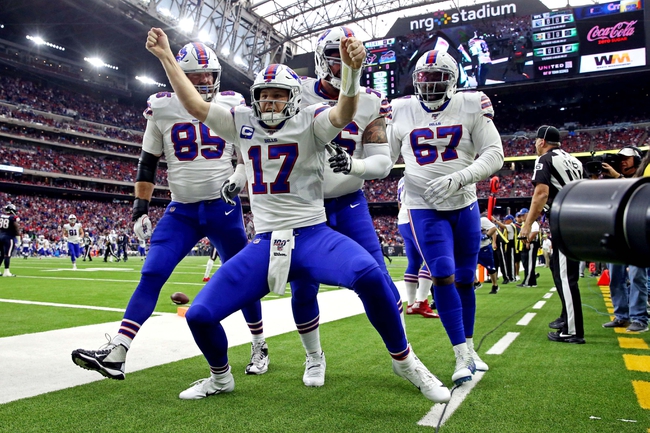 The Buffalo Bills have made the playoffs in two of the last three years and are coming off a 10-win season. The Bills now look for back-to-back double-digit winning seasons for the first time since 1998-99. The Bills 2020 win total is set at nine wins, so they’d certainly accomplish that feat if they cash the over. Get free NFL Picks and NFL Predictions for every game all season long at Sports Chat Place.

Subtractions: Running back Frank Gore remains a free agent, which means his stay in Buffalo is likely over after one season. Gore rushed for 599 yards and two touchdowns on 166 carries and had 13 receptions. Defensively, the Bills lose cornerback Kevin Johnson after one season and 36 total tackles. Defensive end Shaq Lawson is gone after four seasons and 16.5 sacks and 11 pass deflections. Defensive tackle Jordan Phillips bounces after his best season as a pro where he had 9.5 sacks and one forced fumble.

Additions: The Bills made a major splash by trading for one of the best wide receivers in the league in Stefon Diggs. In five seasons with the Minnesota Vikings, Diggs caught 365 passes for 4,623 yards and 30 touchdowns. The addition of Diggs gives Josh Allen a legit No. 1 wide receiver. Defensively, the Bills added three new starters in defensive end Mario Addison, linebacker A.J. Klein and cornerback Josh Norman. Addison is one of the more underrated pass rushers in the league with 55 sacks on his resume. Klein is a veteran linebacker with over 300 tackles and 11 career pass deflections. Norman probably isn’t the same lockdown corner he was a few years ago, but there’s something still left in the tank at 32 years and old and his confidence certainly hasn’t faded.

Overall: The Bills played that underdog role last season, covering and winning games left and right despite being doubted by bettors and oddsmakers. Buffalo won’t be surprising anybody this season.

The Bills return majority of their offense from last season while adding one of the top receivers in the league, so there’s a lot to like there. However, I’m just not sold on Allen at quarterback and I have to see him consistently complete passes for that addition to matter much.

Defensively the Bills were top-five in the league last season and while they lost a couple pieces here and there, they replaced them with veterans who should be easy transitions.

With Tom Brady now out of the AFC East, people may now see the Bills as the team to beat, but I’m just not sold on the quarterback position and we saw this club fall off the map under Sean McDermott the last time they made the playoffs.

I’m leaning toward the under nine wins.

The pick in this article is the opinion of the writer, not a Sports Chat Place site consensus.
Previous Pick
Baltimore Ravens 2020 Win Total - NFL Pick, Odds, and Prediction
Next Pick
What Are The Top Ten Biggest Super Bowl Blowouts In NFL History?