What Are The Top Ten Biggest Super Bowl Blowouts In NFL History? 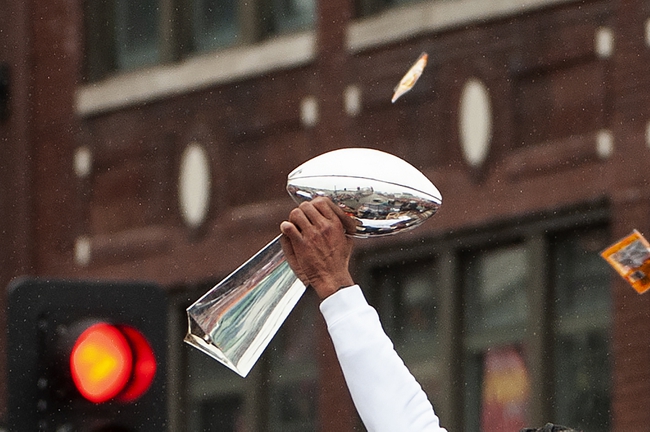 The Super Bowl is one of, if not the most watched sporting event of the calendar year. And you think that the championship game is supposed to have the best of the best from each conference, and while the two teams in the game are good, sometimes, the game itself doesn’t play out that way on the scoreboard and in this list we take a look at some of those games. These are the top ten biggest Super Bowl blowouts.

#1. 45 Points, Super Bowl XXIV, San Francisco 49ers 55, Denver Broncos 10 – The 45-point win for the Niners sits at the top of this list as well as San Fran’s 55 points in a Super Bowl and the 49ers also hold the elite distinction of being the only team to score at least 8 touchdowns in a Super Bowl and at least two in each quarter with San Fran’s lone blemish coming on a missed extra point attempt in the first quarter. This was Joe Montana’s 3rd and final Super Bowl MVP performance after throwing for 297 yards and 5 TDs on 22 of 29 passing with Jerry Rice logging a team-high 7 grabs for 148 yards and 3 touchdowns in the win.

#2. 36 Points, Super Bowl XX, Chicago Bears 46, New England Patriots 10 – This game was a far cry from the state of these two teams in the present day, as Chicago went 15-1 with their stacked defense that included a rookie William “the Refrigerator” Perry, while outscoring their opponents 456-198 in the regular season and becoming the first team to post back-to-back shutouts in their first two playoff games. New England were a Cinderella team as most projections had the Pats missing the playoffs entirely. Instead, the Patriots went 11-5, earned the #5 seed and won 3 straight road games over the Jets, Raiders and Dolphins to go to the big game. New England recorded a 3-0 lead less than two minutes into the game, but the Bears would score 44 unanswered points, including 21 in the 3rd quarter alone, to lift the Lombardi trophy when all was said and done.

#3 (Tie). 35 Points, Super Bowl XXVII, Dallas Cowboys 52, Buffalo Bills 17 - The 3rd of the Buffalo Bills’ record four straight Super Bowl losses was an emphatic one to say the least while the game marked the completion of the resurrection of the Cowboys after posing a 3-13 record just five years earlier which resulted in the 1st overall pick of Super Bowl XXVII MVP Troy Aikman out of UCLA. The pick paid dividends in this game as Aikman threw for 273 yards and 4 touchdowns on 22 of 30 passing. The game was tight for most of the first half, but the Cowboys scored two late first half TDs, and while Buffalo tried to hang around at the end of the 3rd, Dallas would score three TDs in a span of 2:33 to put the game away as the 1993 Cowboys would be heralded as one of the deepest and most talented teams to take the field in NFL history.

#3 (Tie). 35 Points, Super Bowl XLVIII, Seattle Seahawks 43, Denver Broncos 8 - The most recent game on this list, coming on February 2nd, 2014, was one of the more memorable Super Bowls in recent memory and if you’re a Denver fan, for all of the wrong reasons. The first play of the game saw a botched snap and fumble recovery in the end zone for a safety, with the fastest scoring play in Super Bowl history changing the history of prop betting as the safety cashed in at 60-1 as the first scoring play of the game. Seattle would score 36 unanswered points before Denver finally got on the board at the end of the 3rd quarter, but it was far too late as Seattle cruised to their first Super Bowl win in franchise history.

#5. 32 Points, Super Bowl XXII, Washington Redskins 42, Denver Broncos 10 - Denver’s 2nd straight appearance on this list and 2nd straight Super Bowl appearance at the time was coming off of a 39-20 loss to the New York Giants the year prior to fall to 0-3 in the Big Game. The Broncos got out to a strong 10-0 start just under six minutes into the game, but once the second quarter rolled around, it was all Washington, as Denver’s defense just collapsed, much like it did in the 2nd half the previous year against the Giants. The Redskins scored 35 points in the 2nd quarter, which was pretty big considering that the Broncos had only allowed 35 points in an entire game just once that season. After halftime it was smooth sailing for the Redskins as Denver just didn’t have an answer. Doug Williams took home Super Bowl MVP after completing 18 of 29 passes for 340 yards and 4 touchdowns with an interception while Timmy Smith was also in the running for the award after rushing for 204 yards and a pair of touchdowns on 22 carries. Ricky Sanders was responsible for more than half of Washington’s receiving production, logging 9 catches for 193 yards and a pair of receiving scores.

#6. 29 Points, Super Bowl XVIII, Los Angeles Raiders 38, Washington Redskins 9 - The Redskins’ quest for back-to-back Super Bowls wouldn’t come to fruition in this one, despite a 14-2 record and scoring a then-NFL record 541 points as well as a +43 turnover margin and the top-ranked rush defense in the regular season. That defense didn’t scare Marcus Allen, who rushed for 191 yards and a pair of touchdowns on 20 carries en route to his only Super Bowl title and Super Bowl MVP award. The game started and the first. Half ended with a pair of defensive/special teams touchdowns, as Derrick Jensen recovered a block punt in the end zone less than five minutes into the game and Jack Squirek had a 5-yard pick-six with seconds to go in the half and the Redskins never really recovered from that point, giving the Raiders their 3rd Super Bowl title in eight years.

#7 (Tie). 27 Points, Super Bowl XXXV, Baltimore Ravens 34, New York Giants 7 - The Ravens made it to the Super Bowl in just their 5th season, becoming the 3rd wild card team to win the Super Bowl and the 2nd in the last four years. The Ravens made it to the title game boasting one f the NFL’s best defenses of all-time, holding their opposition to just 165 points and 970 rushing yards, becoming the first team to hold opponents to under 1,000 rushing yards in a season and the 165 points against broke the record of the 1986 Bears who allowed 186 points that season. Baltimore’s defense also gave up 10 points or less in 11 games during the regular season and kept that up by holding all three playoff opponents to 10 points or less as well, culminating by doing it once more in the Super Bowl.

#7 (Tie). 27 Points, Super Bowl XXXVII, Tampa Bay Buccaneers 48, Oakland Raiders 21 - Just two years later, Tampa Bay won their first Super Bowl in decisive fashion, and it was almost like a soap opera with coach Jon Gruden getting the better of his former team after the Raiders traded his rights to the Buccaneers earlier in the year. Oakland scored a field goal on their opening drive, but wouldn’t get on the board again until late in the 3rd quarter, during which the Raiders scored 34 unanswered points. Oakland made things interesting in the 4th, cutting the deficit to 34-21, but a pair of pick-sixes in the final 1:18, including Dwight Smith’s 2nd INT return for a touchdown in the game, sealed the deal on the Raiders, who haven’t come anywhere close to the Big Game since that loss, making the playoffs just once since 2002 and finishing in the bottom of the division seven times.

#9. 25 Points, Super Bowl I, Green Bay Packers 35, Kansas City Chiefs 10 - The Inaugural Super Bowl takes its place on this list at #9, seeing the very first meeting between the AFL champion Kansas City Chiefs and the NFL champion Green Bay Packers. There was a ton of animosity coming into the game as the NFL represented the old guard and the mainstay in football while the AFL was an upstart trying to gain respect even though many sports writers and fans thought that if the two sides played it would be a blowout in favor of the NFL side. The game was close at halftime, sitting at 14-10 with Green Bay in front, but the Packers would surge ahead with a pair of 3rd quarter TDs while also adding a 4th-quarter score as well. Kansas City on the other hand was held off of the scoreboard completely as Green Bay cruised to victory and Packers QB Bart Starr took home the first Super Bowl MVP award after throwing for 250 yards and 2 touchdowns.

#10. 23 Points, Super Bowl XXIX, San Francisco 49ers 49, San Diego Chargers 26 - The final game on this list takes us back to 1995, where the 49ers would be just that, putting their namesake on the scoreboard, while San Diego held their own offensively, but couldn’t go punch-for-punch with San Fran, who came in leading the league in points scored with 505 and a league-best 13-3 record. This was the first Super Bowl in which both teams scored in all four quarters and the 75 combined points remains a Super Bowl record. San Francisco also covered the game as the heaviest favorite in Super Bowl history, covering the -18 line with the 23-point victory. The win would mark Steve Young’s 3rd Super Bowl victory as a quarterback and his first and lone Super Bowl MVP award after throwing for 325 yards and 6 touchdowns on 24 of 36 passing while also leading the Niners in rushing with 49 rushing yards.

The pick in this article is the opinion of the writer, not a Sports Chat Place site consensus.
Previous Pick
Buffalo Bills 2020 Win Total - NFL Pick, Odds, and Prediction
Next Pick
Who Are The NFL Quarterbacks With the Most Passing Yards In A Game?