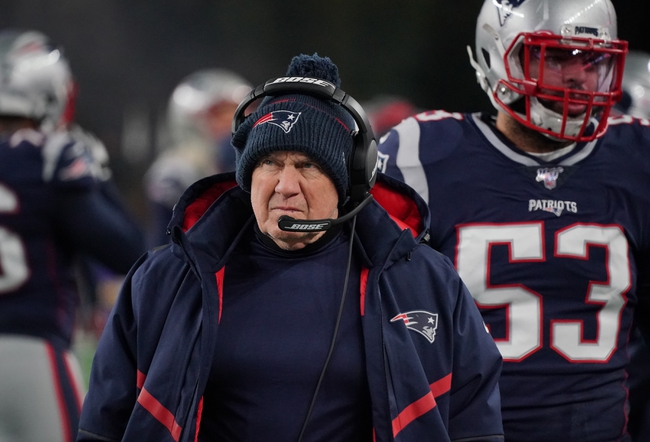 Heading into the 2020 NFL season, the New England Patriots are one of the league’s biggest question marks. After posting a 12-4 record in 2019 and suffering an upset loss at home by the Titans in the Wild Card Game, the Pats will attempt to continue their epic run of dominance in the AFC East with some new faces carrying heavy loads. Can New England get back to double-digit wins this year? Get Free NFL Picks and NFL Predictions for every game all season long at Sports Chat Place.

Subtractions: There’s one obvious elephant in the room for New England as they enter the 2020 NFL campaign, and that’s the absence of 19-year quarterback Tom Brady. It’ll be strange seeing Brady in a Buccaneers uniform this season, and despite a mild statistical regression over the past couple of years, his knowledge of the offense is a huge loss for the Patriots.

Beyond that, New England also loses some impact players from the defensive side; OLBs Jamie Collins and Kyle Van Noy left for Detroit and Miami respectively, and free safety Nate Ebner is now with the Giants. Collins posted 81 combined tackles and 7.0 sacks in 2019, and Van Noy managed 6.5 sacks with 56 combined tackles last year.

Still, New England has always done a good job at dealing with season-to-season turnover so they should be able to plug some other guys into the gaps without a ton of falloff.

Additions: Everything here hinges on who the Week 1 starting quarterback will be, and though we probably won’t know for sure who that is until much closer to the season, we’ve got some early indications. Second-year QB Jarrett Stidham is a strong option, and the Patriots brought in 35-year-old veteran Brian Hoyer on a one-year deal to provide some experience and depth. Hoyer can competently run the offense if necessary, but he’ll probably help out more in a developmental capacity and as a locker room presence.

Aside from that, there are some interesting draft and free agency options out there (Cam Newton being an intriguing thought) so New England will have some choices to make leading up to Week 1. Anyone the team could bring in would obviously be a step down from Brady, however.

Overall: The one major thing working in New England’s favor heading into the 2020 season is how bad the rest of the AFC East has been. We can probably still pencil in wins for divisional games at Foxboro, and the Patriots should do pretty well in their three divisional road games.

Outside of the AFC East however, New England has a pretty tough schedule overall. They’ve got games against solid teams like the Chiefs, Ravens, Texans, 49ers, Seahawks and Rams, so they’ll have to do fairly well in those in order to hit double-digit wins.

With Bill Belichick at the helm in an otherwise bad division, it’s difficult to imagine a New England team not hitting 10 victories in a season, so I’m leaning toward the over total here. When all the dust settles this year, the Patriots should be back on top of the AFC East.

The pick in this article is the opinion of the writer, not a Sports Chat Place site consensus.
Previous Pick
Who Are The NFL Quarterbacks With the Most Passing Yards In A Game?
Next Pick
New Orleans Saints 2020 Win Total - NFL Pick, Odds and Prediction