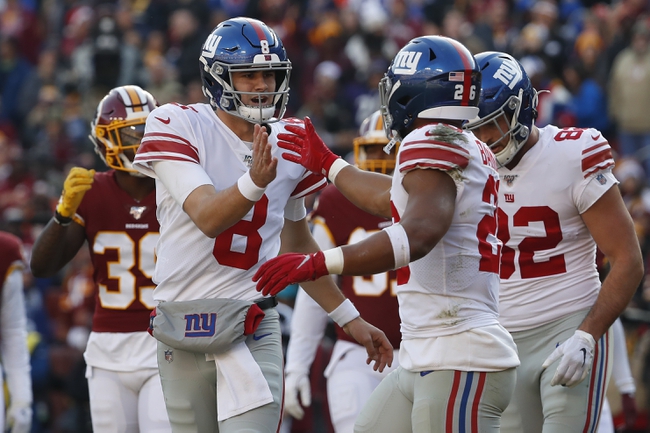 The good news about the New York Giants’ 2020 season outlook is that the team really doesn’t have anywhere to go but up. After a pretty ugly 2019 campaign that saw the Giants finish at just 4-12, New York will embark upon new territory this season now that two-time Super Bowl winner Eli Manning has retired. If all goes well, the Giants could flirt with a .500 record and regain some relevance in the NFC East. Get Free NFL Picks and NFL Predictions for every game all season long at Sports Chat Place.

Subtractions: For the first time since 2003, accomplished quarterback and New York mainstay Eli Manning will not be on the roster. Manning started just four games for the Giants in 2019, two at the beginning of the year and two filling in for an injured Daniel Jones. Manning posted six touchdowns and five interceptions in those games.

Head coach Pat Shurmur is also gone; he was dismissed following the final game of the 2019 regular season after just two years at the helm. Shurmur was instrumental in the team drafting Jones, but he could only muster nine wins in his two seasons.

Additions: Joe Judge comes in as the Giants’ new head coach, and will try to help the franchise get back on track. Judge has a 15-year coaching history, including a stint with the Patriots special teams from 2012-19. This will be his first year as a head coach.

Another interesting find was defensive end Leonard Williams, who the Giants got from the Jets in exchange for a couple of draft picks. Williams is a bit of a wild card, as he’s had some on-field production and behavior issues in the past couple of years. That said, Williams has 17.5 career sacks and if he can return to form he’ll be an impact player on the line.

New York also boasts a pretty decent free agent haul, highlighted by cornerback James Bradberry. He’ll be a key cog in the secondary and will fit into a leadership role with the Giants. Inside linebacker Blake Martinez is also an important add; he’s got 512 career tackles and 10.0 career sacks. Martinez will likely also be calling defensive plays and should be a good fit as a durable, smart player on a team looking to improve.

Overall: Considering the Giants only won four games in 2019, the fact that they’re predicted to pick up a few more wins this season is encouraging. The team has added some solid players in free agency and has an experienced coaching staff surrounding Judge.

That said, there are sure to be the proverbial injury bugs and bumps in the road during this 2020 campaign, and New York is going to need impact players like Jones and talented RB Saquon Barkley to step up and produce solid numbers. I feel like six or seven wins is about right in this case, and a 6-10 or 7-9 record would really be a step forward for this team. I’m thinking New York will probably split their divisional games, but probably won’t do so well against the talented AFC North and NFC West. I’m sticking at 6-10 here, and taking the under.