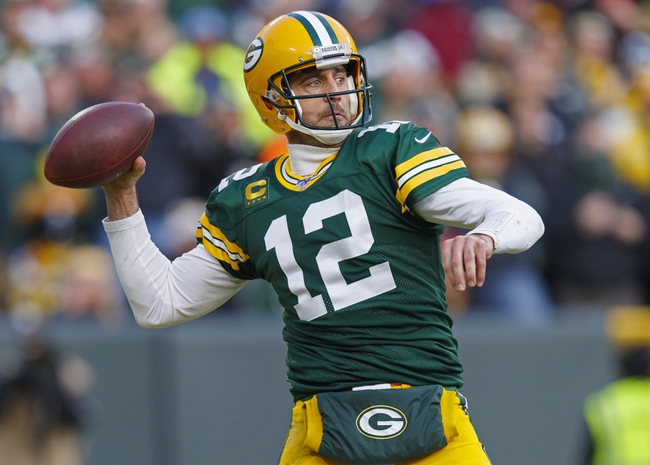 The Green Bay Packers come into the 2020 NFL season with high expectations after taking first place in the NFC North last year and making it all the way to the NFC Championship game. The Packers’ core group of impact players is strong, and if the team can avoid the injury bug Green Bay has all the tools to make a deep playoff run once again in 2020. Get Free NFL Picks and NFL Predictions for every game all season long at Sports Chat Place.

Subtractions: Green Bay returns a strong roster heading into 2020, but there are a few very notable names no longer with the team this season. Linebacker Blake Martinez heads up that list, as he got a three-year contract with the Giants at over $30 million in value. Martinez is a defensive machine over the last few seasons, racking up 155 total tackles last year with three sacks.

Then there’s Bryan Bulaga, a veteran right tackle who has played consistently well despite fighting through a few injuries over the years. He got a three-year, $30 million contract from the Chargers.

Tight end Jimmy Graham is also gone from Green Bay. Despite a relatively tepid 38 receptions for 447 yards and three touchdowns last season, his absence removes a big red zone target for Packers QB Aaron Rodgers. Graham is now with Green Bay’s rival Chicago, so that adds another layer of intrigue to those big divisional matchups.

Additions: Green Bay made some moves in the offseason to address their free agent turnover. The Packers signed former Lions tackle Rick Wagner to a two-year deal, and added a high-ceiling linebacker in Christian Kirksey. Although his numbers have been stymied the last two seasons due to injuries, Kirksey had a couple of nice campaigns in 2016 (148 total tackles) and 2017 (138 total tackles). If he can stay healthy, Kirksey will add a lot of value to the Green Bay linebacker corps.

Wide receiver Devin Funchess is another interesting add in Green Bay. His best year was 2017 in Carolina, snagging 63 receptions for 840 yards and eight touchdowns. Funchess missed almost all of 2019 with a collarbone injury but could be a very reliable target with the Packers if he returns to form.

Overall: The NFC North is a potentially strong division this year, and none of those games will be easy for the Packers. Minnesota will be a solid team, Detroit should be better, and if Chicago can figure out what they’re doing on offense they’ll be a potential division contender as well.

Beyond that, the Packers will have to go through the AFC South (which on the whole should be a decent matchup for Green Bay) and the NFC South (which contains an intimidating Saints team but not a whole lot else). On paper it doesn’t look like an overly rough schedule if the Packers play to their abilities. Double-digit wins seems very doable for this Green Bay team in 2020, so I’m going with the over.