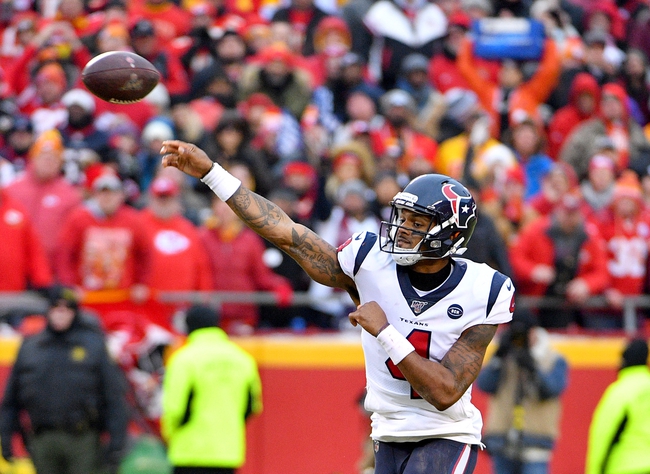 The Houston Texans have won the NFL’s AFC South Division in four of the last five years, and they’ll attempt to accomplish that feat again in the 2020 season. The Texans went 10-6 last year and beat the Bills in a nail-biter overtime Wild Card Game, but fell by 20 in the Divisional Playoffs against the eventual champion Chiefs. Can this retooled Houston team rejoin the AFC elite this season? Get Free NFL Picks and NFL Predictions for every game all season long at Sports Chat Place.

Subtractions: The Texans have been pretty active on the trade front the last couple of offseasons, and there will be plenty of former Houston players absent from the 2020 roster. The obvious and most notable name here is wide receiver DeAndre Hopkins, who was with the Texans for seven seasons. Hopkins was a key contributor his entire career in Houston, and he racked up 104 receptions for 1,165 yards and seven touchdowns in 2019. Hopkins is now with the Cardinals.

Nose tackle DJ Reader has also departed from Houston, signing a four-year, $53 million deal with the Bengals. Reader has 154 total tackles and 6.5 sacks over his NFL career.

The Texans will also be without veteran cornerback Jonathan Joseph this season—he left for free agency. Joseph played in 14 games for Houston in 2019, posting 51 combined tackles, but he’s only managed six total interceptions over the last five years.

Additions: The Texans have a host of new arrivals heading into the 2020 campaign, and that crop is headed up by running back David Johnson, who came over in the Hopkins trade. Not too many fans were pleased with that deal, but there were some extenuating financial circumstances involved. Looking at Johnson’s stats, it’s difficult to imagine he’ll fill in the massive statistical void left by Hopkins. Johnson had a stellar 2016 (1,239 yards and 16 touchdowns), but hasn’t cracked the 1,000-yard mark in any of the three seasons since. He had 345 yards and two scores in 13 games last year.

Another interesting addition is veteran wide receiver Randall Cobb, who enters Houston via free agency on a three-year $27 million deal. In 15 games with the Cowboys last year, Cobb posted 828 yards with three touchdowns. Although Cobb’s stats have diminished since his breakout season in 2014 with the Packers, he should provide some nice depth at wide receiver and serve as a leader in the locker room. Still, it’s difficult to find much excitement in Houston’s WR and RB corps.

Overall: Salary issues or no, the Hopkins trade is going to turn a lot of fans and pundits off the Texans this season. He’s one of the best receivers in the NFL, and there’s really no way for Houston to fill that gap. The disgruntlement caused by Hopkins’ departure will likely even trickle down to the players themselves, and it’s going to take some strong locker room leadership to get the Texans performing well on a consistent basis.

Another thing working against Houston in 2020 is a tough schedule. The team will face a stout NFC North (Packers, Vikings) and a pretty good AFC North (Ravens, Steelers), not to mention the intimidating games versus the Patriots and Chiefs.

All of that said, the AFC South is pretty wide open once again this year. Sure, the Titans had a breakout campaign in 2019 but they’ve got their limitations. The Colts are a question mark, and the Jaguars look like they’ll be average at best.

A 9-7 or maybe even an 8-8 record could very well win the AFC South this season, but given the difficult matchups on the slate and their roster turnover I don’t think Houston will break .500 this year. I’m going under on win total.