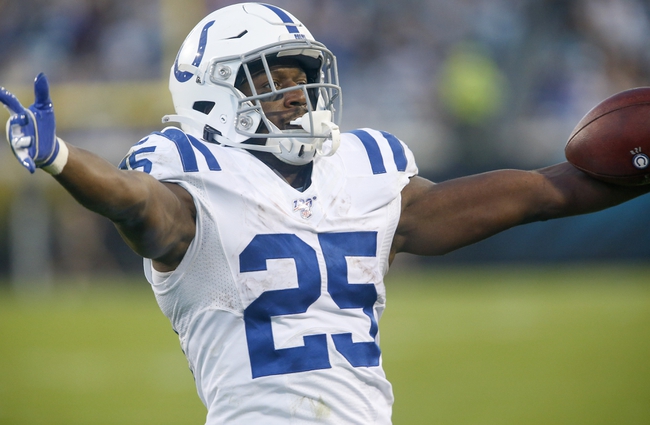 The Indianapolis Colts will be looking to put their 7-9 record last season behind them in 2020, and with some new faces in key spots on the roster the Colts could very well contend for the AFC South title. Indianapolis was reeling in 2019 following star quarterback Andrew Luck’s retirement, but the team heads into this year’s NFL campaign with a fresh outlook. Get Free NFL Picks and NFL Predictions for every game all season long at Sports Chat Place.

Subtractions: The Colts lost a few names in the receiver slots over the offseason. One is tight end Eric Ebron, who had a great year in 2018 with 66 receptions for 750 yards and 13 touchdowns, but only managed 375 yards for three scores in 11 games in an injury-shortened campaign last year.

Wide receiver Devin Funchess, who really didn’t get a chance to catch on with the team due to a broken collarbone last year, is gone as well. Funchess only started one game for Indianapolis last season and he’ll try to get his career going again in Green Bay.

We’ll expand on this one in a moment, but it’s also worth noting quarterback Jacoby Brissett is no longer the Colts starter. Brissett stepped in valiantly after the sudden retirement of Andrew Luck, starting 15 games in 2019. He ended up throwing for 2,942 yards with 18 touchdowns and six interceptions but really didn’t get a chance to catch on as Indianapolis’ franchise QB.

Additions: And the reason Brissett isn’t starting this year is the Colts’ free agency prize: former Chargers quarterback Philip Rivers. The 38-year-old Rivers signed a one-year deal for $25 million and will be the key cog in helping Indianapolis contend for a division title. The good news there is that Rivers is an accomplished veteran quarterback and a consistently solid decision-maker. The bad news there is that Rivers’ numbers took a big step back last season; he threw for 4,615 yards with a 66.0 percent completion percentage, but also had a tepid 23 touchdowns with 20 interceptions—that’s tied for the second-most picks in Rivers’ career.

Outside of that, the Colts simply touched up their roster in free agency, adding defensive tackle Sheldon Day on a one-year deal and re-signing tackle Le’Raven Clark on a one-year contract as well. Indy will still have plenty of familiar faces on the roster in 2020.

Overall: The good news for the Colts offense is that Rivers is set up pretty well with a couple of good running backs in Marlon Mack and Nyheim Hines. Outside of that, the receiving corps could use some more depth outside of TY Hilton. We could see Indianapolis target some impact players in the draft.

Another thing working against the Colts this season is a pretty tough schedule outside of divisional play. Indianapolis will face the Ravens, Steelers, Packers, Vikings and Bears this year; all of those games should be fairly tricky to say the least. That said, the Colts also have some easier matchups (on paper anyway) in the Jets, Raiders, Bengals and Browns.

As far as the AFC South is concerned however, it should be wide open this year. The Texans seem to have taken a step back, the Titans are potentially dangerous but not quite multi-dimensional, and the Jaguars are still the Jaguars. The Colts should be able to contend for a division title if Rivers finds a groove and the skill players step up.

Indianapolis leaves a few things to be desired in 2020, but I like the team to finish above the .500 mark this season. I’m going with the over on win total here.