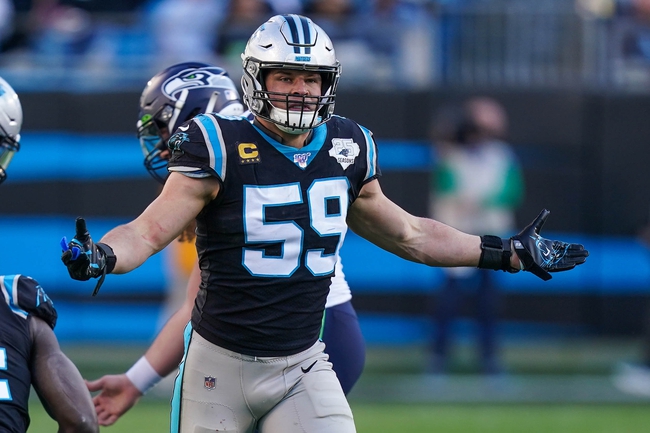 The Carolina Panthers come into the 2020 season after undergoing a pretty big facelift personnel-wise, with a new quarterback at the helm and a new head coach in Matt Rhule who will hoping to translate some of his recent collegiate success at Baylor to the Carolina Panthers who went 5-11, finishing at the bottom of the NFC South just two years removed from playoff football and an 11-win season. Get Free NFL Picks and NFL Predictions for every game all season long at Sports Chat Place.

Additions: Besides bringing in Rhule, the Panthers agreed to a three-year deal worth $63 million to lead the Panthers into the future. Carolina also gave their new pivot a couple of downfield targets, signing Pharoh Cooper and Seth Roberts, both of whom are hoping to have some form of career resurgence in Rhule’s system after a disappointing 2019 season. The Panthers also added some protection for Bridgewater up front, acquiring Russell Okung from the Los Angeles Chargers in exchange for guard Trai Turner.

Subtractions: The reason Bridgewater was brought in on such a lucrative deal based on his performance up to this point, is because the Panthers cut ties with their top two quarterback options from last season. This will be the first season since he was taken first overall in 2011 that Cam Newton won’t be a Carolina Panther on opening day. Newton also dealt with his fair share of injuries over the last couple of seasons, leaving the reins to Kyle Allen, who was also cut free from Carolina, being traded to the Washington Redskins for a 5th-round pick in the 2020 draft.

Outlook: We saw what life for the Panthers was like without a star QB for Cam Newton, as Allen was unable to really shoulder the load and the axe fell on Ron Rivera who was still a pretty good head coach. Matt Rhule did a great job turning around the Baylor football program in a span of a couple of seasons, but Christian McCaffrey and Luke Kuechly can’t win a lot of football games on their own, and there’s just not enough of an extended sample size to say that Teddy Bridgewater is up to the task of keeping Carolina afloat. I think the Panthers remain at the bottom of the NFC South for a second straight year, and while 5.5 is a low number for wins, I just don’t know if Carolina breaks that threshold. I could easily see the Panthers finishing with 4 or 5 wins max, so the under is the play here for me on the Panthers.