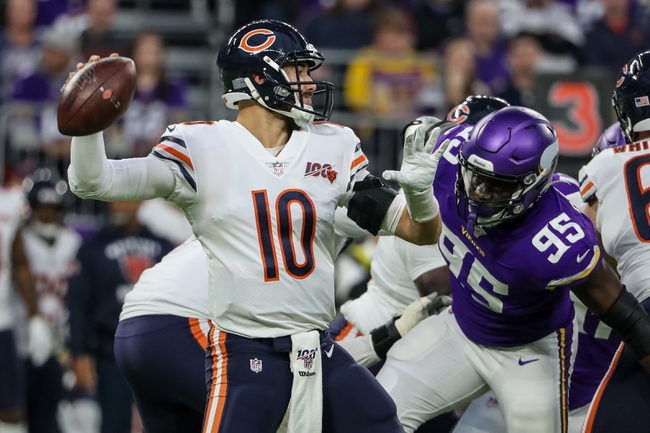 Breaking Down The Chicago Bears WinTotal

The Chicago Bears entered the 2020 season on pins and needles after ending up disappointed last season. Chicago fans entered the season optimistic after a 12-4 finish the season prior and their first division title since 2010, only to watch the Bears crumble and fall back to .500 after frustrating play at the QB position and an O-line that fell apart as the season went on which led to the Bears’ 8-8 finish.

Additions: One of the bigger surprises for the Bears’ faithful was the acquisition of Super Bowl 52 MVP Nick Foles from the Jaguars after Foles dealt with a shortened season in 2019 after suffering a broken left collarbone in the opening week. It became clear to Bears’ upper management that Mitchell Trubisky may not be the long term answer they were looking for, but financially, Chicago’s committed so it’s not something the Bears can just afford to give up on right now. Chicago also added some receiving help, signing Jimmy Graham to take over #1 tight end duties and defensively, the Bears replaced some key pieces that they had severed ties with by bringing in Artie Burns to help in the secondary while adding Barkevious Mingo and Robert Quinn to solidify the edge rush up front for Chicago.

Subtractions: The Bears made a few head-scratching moves in the offseason in terms of offloading talent, which includes letting top linebackers Nick Kwiatkoski and Danny Trevathan drift into free agency while cutting ties with Prince Amukamara in the secondary and Leonard Floyd on the defensive front. The Bears also cut loose Taylor Gabriel from their receiving corps, but it’s just not adding up for the Bears in terms of making progressive moves to offset and justify the cuts and subtractions they’ve made from last year’s team.

Outlook: It’s hard to say what we’re going to see from the Bears, as Chicago struggled under Trubisky last season, but we’ve also never really seen Nick Foles play a full season, and I doubt that’s going to change here as I’m expecting there to be some back and forth between Trubisky and Foles throughout the season. All in all, I just don’t see how the Bears really improve on last season. Chicago’s made some moves and maybe the defense improves a bit, but I still think that the Bears have regressed enough to a point where they fall back below .500 this season, hitting the under 7.5 magic number for wins this season.