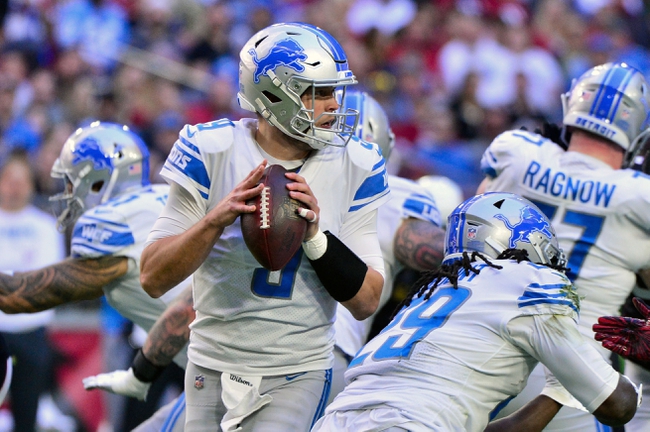 The Detroit Lions come into the 2020 season looking to bounce back after a disappointing 2019 season that started well, with the Lions going 2-0-1 in their first three games with a pair of wins over the Chargers and Eagles. The Lions even hung tight with the Chiefs and Packers, but the Lions lost 9 straight and 12 of their last 13 games to finish the season with a paltry 3-12-1 record and a second last place finish in the NFC North in as many seasons under Matt Patricia. Get Free NFL Picks and NFL Predictions for every game all season long at Sports Chat Place.

Additions: It wasn’t really a surprise to anyone that watches the Lions and a Matt Patricia coached team that their big splashes in free agency would be on the defensive end, as the Lions signed Desmond Trufant to anchor the Lions’ secondary as well as signing Jamie Collins to lead the linebacking corps on a three-year deal and acquiring Duron Harmon via trade for an ex-Patriots reunion in the Motor City.

Subtractions: The biggest differences from last year’s Lions defense to this one, is that they’re going to be without two of their key pieces from that squad after releasing Devon Kennard, who didn’t have a bad year by any stretch, logging 7 sacks and 58 tackles with a team-high 45 solo tackles, as well as trading three-time pro-bowler Darius Slay to the Philadelphia Eagles for a couple of draft picks in the upcoming draft.

Outlook: Almost, if not all, of Detroit’s success will hinge on Matthew Stafford staying healthy, which hasn’t been a problem most years, playing in all 16 games in every season since 2011 except for last year where he was held to just 8 games with injuries. The problem for me though is that the Lions didn’t do a whole lot to get better offensively, as there’s only so much that guys like Kerryon Johnson, Marvin Jones and Kenny Golladay can do, and we’re still waiting for T.J. Hockenson to be the tight end prodigy that many pundits expected him to be coming out of college. The Lions lost a lot of close games and were probably better than a three-win team, but the fact is that Detroit didn’t make the moves necessary to give them a better chance in those close games. I can see a 5 or 6 win season for Detroit, but either way you slice it, I think they finish the year under the projected win total.