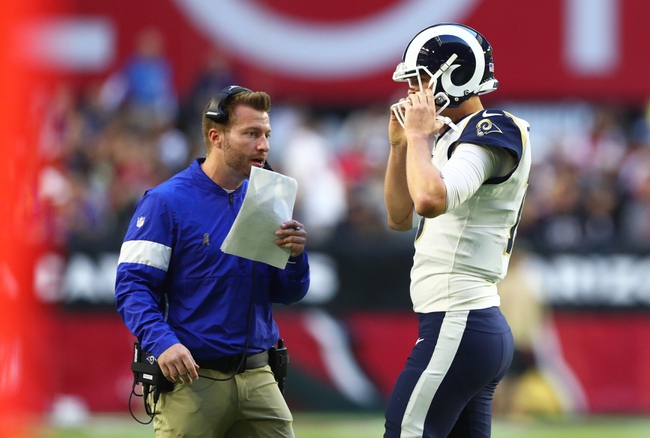 The Los Angeles Rams followed up a Super Bowl appearance with a disappointing 9-7 record and an offense that took a major step backwards. The Rams still haven’t made the playoffs three straight seasons since 1999-01 and they hope they can get back on the ball this season. The Rams 2020 win total is set at nine wins, meaning oddsmakers are confident they can right the ship and return to their 2017 or 2018 form. We’ll see…

Subtractions: The big loss for the Rams this offseason was releasing running back Todd Gurley. While he battled through knee injuries all of last year, Gurley still has over 5,400 rushing yards and 58 rushing touchdowns through five seasons. Gurley has topped double-digit rushing touchdowns each of the last three years and is tied with Marshall Faulk for the most rushing touchdowns in Rams history. Linebacker Cory Littleton leaves the Rams after four seasons and leading the team in tackles last season. Pass rusher Dante Fowler bounces after 11.5 sacks with the Rams last season. Veteran linebacker Clay Matthews remains a free agent after eight sacks and 37 total tackles with the Rams last season. Six-time Pro Bowl safety Eric Weddle retires after one season with the Rams.

Additions: The Rams added two pieces on the defensive side this offseason by bringing in defensive end A'Shawn Robinson and linebacker Leonard Floyd. Robinson hasn’t fulfilled expectations up to this point, but he does have five career sacks and 16 pass deflections, and he could thrive in a better situation with Aaron Donald taking away a lot of the attention. Floyd has been a solid linebacker through four seasons, producing a 156 combined tackles, 18.5 sacks and nine pass deflections. Both players are in nice situations and have the ability to give us their best football yet.

Overall: I’m not worried about the Rams defensively, as they control the defensive line and will have a full season of Jalen Ramsey in the secondary. Brandon Staley is also a proven defensive mind who has done good work as a linebackers coach, so I have confidence in him as a defensive coordinator.

The issue I have is with the Rams offense. Yes, Sean McVay is a hell of a coach and one of the smarter guys in the business, but just throwing Gurley on the street could backfire and I’m not sure what to think of quarterback Jared Goff. One season Goff is tearing the league up and completing nearly 65 percent of his passes, the next year he’s struggling with accuracy and throwing 16 interceptions. I liked Goff coming out of Cal and the potential is there, but he didn’t look good last season and these Rams aren’t nearly as attractive when he’s not playing well. I’m also not all that high on Malcolm Brown being the starting running back with little experience behind him.

The Rams also play in a competitive NFC West where there’s no breathing room, and they have to play the Dallas Cowboys, New England Patriots, Chicago Bears, Buffalo Bills, Philadelphia Eagles and Tampa Bay Buccaneers on top of that.

A bounce back season wouldn’t surprise me, but the Rams are one of those teams I’m going to feel out for the first few games before jumping in head first. So, I’m leaning under in the win total.

The pick in this article is the opinion of the writer, not a Sports Chat Place site consensus.
Previous Pick
Pittsburgh Steelers 2020 Win Total - NFL Pick, Odds and Prediction
Next Pick
Who Are The NFL Running Backs With the Most Rushing Yards In A Game?