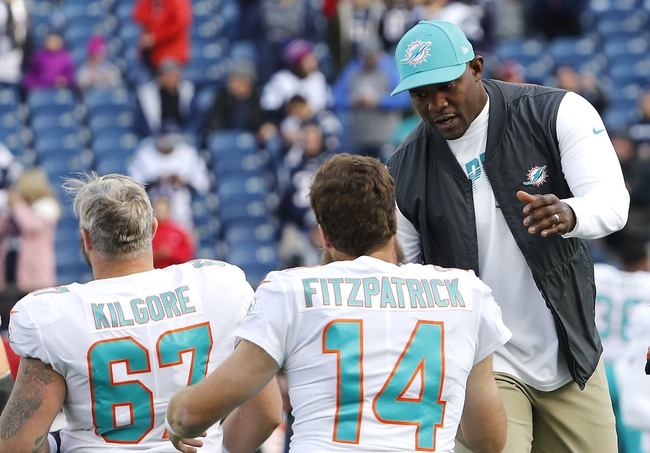 The Miami Dolphins have won a combined 18 games the last three years, but they showed serious progress in the first season under coach Brian Flores, winning five games with an XFL roster that did everything it could to tank. Oddsmakers don’t seem to be all that high on the Dolphins this season, as their win total is set at just six wins. The Dolphins have topped six wins five times since 2011.

Subtractions: The only noteworthy loss this offseason was when the Dolphins released safety Reshad Jones, a defensive back who has spent 10 seasons with Miami. Jones had 21 interceptions, three forced fumbles, 10.5 sacks and his 599 solo tackles are the second most in franchise history. Only Zach Thomas has more tackles (1,042) in a Dolphins uniform.

Additions: The Dolphins brought in guard Ereck Flowers to improve what was a rough offensive line. Flowers hasn’t lived up to the potential of being a top-10 pick in 2015, but he’s coming off his best season of his career and has 71 starts under his belt. Jordan Howard has been an underrated running back his entire career and has 3,895 rushing yards and 30 touchdowns. The Dolphins then spent serious money on the defensive side of the ball in defensive end Shaq Lawson, linebacker Kyle Van Noy and cornerback Byron Jones. Lawson is a solid pass rusher who hasn’t played his best as he approaches 26 years old. Van Noy is a winner from the New England Patriots, had a career-best 6.5 sacks last season and is familiar with this Miami coaching staff. Jones is one of the better young corners in the league and has 44 pass deflections to his credit.

Overall: The Dolphins won’t reach their full potential until they find a quarterback, but there’s confidence they’re on the right track and finally have the right coaching staff based on last years success and how guys didn’t quit on a lost season. Even with Ryan Fitzpatrick under center this season, the Dolphins offense will be improved with a better offensive line, a veteran running back and sharper weapons at receiver. Albert Wilson is finally healthy, DeVante Parker is more confident and Mike Gesicki has another year under his belt.

Defensively, the Dolphins were already showing promise with Raekwon McMillan and Jerome Baker at linebacker and promising young players on the defensive line such as Christian Wilkins and Davon Godchaux. Now, the Dolphins have a more balanced pass rush with Lawson and Van Noy in the front seven and Vince Biegel coming off the best season of his career.

There’s also an argument to be made that Jones and Xavien Howard is the best cornerback tandem in the league.

Schedule wise, the Dolphins are going to run into a lot of playoff contenders, but they do get the Kansas City Chiefs, Los Angeles Chargers, Los Angeles Rams and Seattle Seahawks at home. There’s also no Tom Brady in New England.

The bottom line is the Dolphins won five games last year with a roster that was the worst in the NFL and a front office that did everything it could to end up with the first overall pick. With more talent and a ton of draft picks coming in, there’s no doubt in my mind that the Dolphins are going to win more games than last season.

The Miami Dolphins over six wins is probably my strongest win total bet of the season.