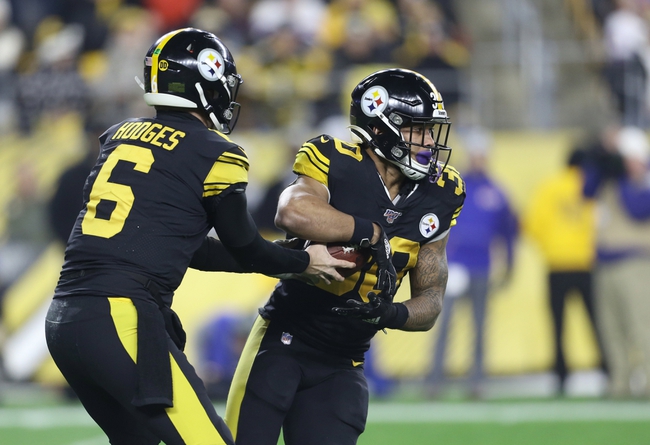 The Pittsburgh Steelers are coming off of a disappointing 8-8 NFL season in 2019, finishing second in the AFC North and missing the playoffs for a second consecutive year. Heading into the 2020 season, the Steelers have a few new faces on the roster and will look to retake the divisional crown for the first time since 2017. Get Free NFL Picks and NFL Predictions for every game all season long at Sports Chat Place.

Subtractions: The Steelers lost a few notable players in free agency, but for the most part the roster is still pretty solid following an injury-filled 2019 campaign. Perhaps the biggest impact player to leave via free agency is defensive tackle Jason Hargrave, who signed a three-year, $39 million deal with Philly. In 2019, Hargrave posted a career-high 60 combined tackles with 4.0 sacks, playing in all 16 games.

Guard BJ Finney has also left Pittsburgh; he signed a two-year deal with Seattle for $8 million. Linebacker Tyler Matakevich has moved on to Buffalo, and tight end Nick Vannett is in Denver now. Both players signed two-year deals.

The Steelers will be without retired guard Ramon Foster (a.k.a. “The Big Ragu”) this season for the first time since 2009. Foster has been a staple on the Pittsburgh line for most of that stretch, and his veteran presence will surely be missed.

Additions: Although the Steelers normally aren’t big players in free agency, an interesting add this offseason was tight end Eric Ebron. His 2019 season with the Colts was shortened by an ankle injury so he only played in 11 games, posting 31 catches for 375 yards and three touchdowns. If he can regain form however, Ebron’s ceiling is quite high. In 2018, he caught 66 passes for 750 yards and 13 touchdowns; all career highs. Ebron should serve as a potent weapon on a Steelers offense that struggled to find consistency through all the injuries last season.

The Steelers also added some offensive line depth by picking up center Stefen Wisniewski. He’s been in the NFL since 2011 and is a two-time Super Bowl winner. Wisniewski should be able to help enhance a Pittsburgh offensive line that’s already pretty darn good.

Overall: The Steelers were dealt some pretty tough hands in 2019. The injury bug was everywhere, taking out key players like Ben Roethlisberger, JuJu Smith-Schuster, James Conner, etc. for various periods during the season. Despite all that, Pittsburgh had control of a playoff spot in Week 15. We know how that worked out, however. (Three straight losses to end the year.)

There are many reasons to be optimistic about the Steelers’ 2020 campaign. Roethlisberger, Smith-Schuster and Conner are capable players and should be able to improve on their numbers last year—assuming everyone can stay healthy. Pittsburgh also has some great developing players on defense, and that squad should be strong once again this season.

We’ll likely see Pittsburgh pick up some depth players in the draft, but as of this writing they don’t have a first- or a fifth-round pick in 2020 due to the Minkah Fitzpatrick trade.

The good news is that the Steelers’ schedule doesn’t look too intimidating. Sure, the divisional games are always tough no matter the teams’ records, but outside the AFC North it doesn’t look too bad--on paper, anyway. Pittsburgh has games against the sketchy AFC South and NFC East in 2020, as well as matchups versus the mediocre Broncos and Bills. There are plenty of wins there for the taking.

Double-digit victories seems within reach for this Pittsburgh team, so long as the offense can stay consistent and the team doesn’t see another major batch of injuries. I see maybe a 4-2 record in the division, and another six or seven wins in the other games. I’m going with the over on the Steelers 2020 win total.