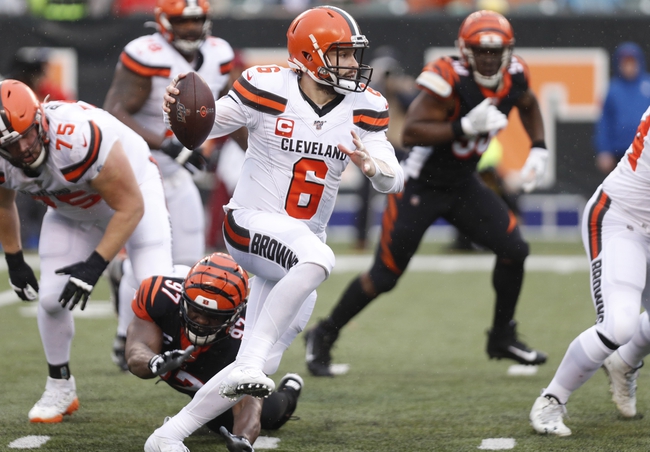 Expectations were sky high in Cleveland in the 2019 season, but inconsistent QB play and some horrendous coaching led the Browns to an extremely disappointing 6-10 finish, despite acquiring stars like Odell Beckham Jr. and Kareem Hunt. Cleveland would sit at 2-2 through the first month of the season and 2-4 at their bye week before getting to 2-6 and winning their next three to be in the mix at 5-6 over the last month of the season, but losses in four of their final five games sealed their fate and put Cleveland out of their misery once again, resulting in a 12th straight losing season. Get Free NFL Picks and NFL Predictions for every game all season long at Sports Chat Place.

Additions: The Browns made a couple of key splashes in free agency, giving Baker Mayfield a new target at tight end in Austin Hooper, who is coming off of a second straight pro-bowl season and a career year in which he logged highs of 75 receptions for 787 yards and 6 touchdowns for the Falcons last season. The Browns also added Case Keenum at (most likely) backup QB, and give a veteran presence for Mayfield to learn from and in reality, Keenum is only three years removed from going to the NFC Championship game, so it gives Mayfield a guy who has been there before to learn from as well. Defensively, the Browns bolstered their front seven by adding Adrian Clayborn and Andrew Billings up front as well as B.J. Goodson in the linebacking corps.

Subtractions: The 2020 season will be the first since drafting Joe Schobert in 2016 that Schobert won’t be in the middle of Cleveland’s linebacking group. Schobert came off of another strong year, finishing with 133 total tackles as well as a career-high 89 solo tackles with 7 tackles for a loss. The Morgan Burnett experiment in Cleveland also went out without a fuss, as Burnett just had another bad year since leaving Green Bay after putting up just 41 total tackles in 8 games last season.

Outlook: How does that old saying go? Fool me once, shame on you, fool me twice, shame on me? Yeah well I believed in the Browns once and it burned me and that’s all I needed to see. This team went from sky-high expectations before the season started, and by the end of the season there was already talk about guys being detrimental to the locker room and talk of blowing up the whole thing. And you expect me to believe that a rookie head coach who hasn’t had a single game of head coaching experience is going to turn that around? No thanks. I wouldn’t be surprised if the Browns don’t win a game within the division this year and I think the Browns are headed for another sub-.500 season and potentially a last place finish in the AFC North. I’ll gladly take the under on the win total for Cleveland here.