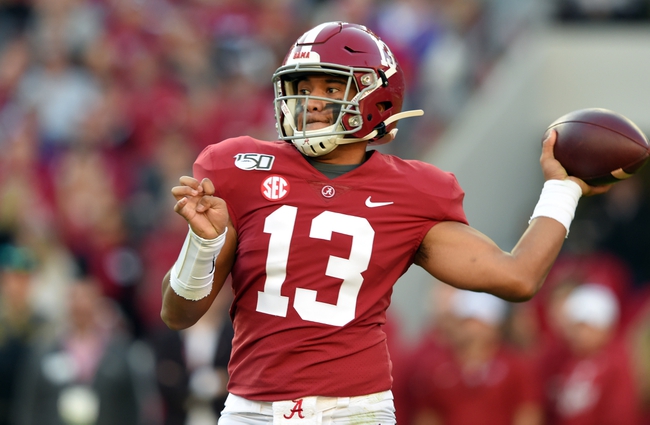 Which Team Is Going To Draft Tua Tagovailoa?

One of the most fascinating things in the upcoming 2020 NFL draft is where Alabama quarterback Tua Tagovailoa gets selected. Without his injury history, Tagovailoa is probably the first overall pick. Now, there’s rumors of him being anywhere from the second to the fifth pick and there’s a wide variety of teams that have been liked to his services. You can bet on where Tagovailoa ends up.

Let’s look at a few possibilities…

Miami Dolphins -150 - The Miami Dolphins have been the team that’s linked to Tagovailoa the most since the start of last season and it was expected that they were going to tank to make sure they get him. The tanking process didn’t work out all that well and now the Dolphins sit at the fifth pick overall. Tagovailoa has been caught wearing Dolphins colors and enjoying the lifestyle of Miami, and the Dolphins haven’t had a legit starting quarterback since Dan Marino. The fins are the likeliest option according to these odds, but it’s now a question if the Dolphins will have to trade up to get Tagovailoa.

Los Angeles Chargers +195 - The Los Angeles Chargers are currently at the sixth spot in the NFL draft, but they should be very quarterback hungry after watching Philip Rivers leave town. If the season started today, Tyrod Taylor would be the starting quarterback with Easton Stick as the backup. That’s really not going to cut it and it’s not what you want to see with a Chargers team that’s had issues convincing fans since the move from San Diego. The Chargers should be aggressive to get a quarterback in the first round.

Washington Redskins +340 - The Washington Redskins have to be considered for Tagovailoa since they have the second overall pick. With the Cincinnati Bengals all but locked in on LSU quarterback Joe Burrow, the Redskins don’t have to do anything but stay put to cash this ticket. However, the Redskins did just draft a first round quarterback last year in Dwayne Haskins, so you have to question if they’d double dip on the position. The only way the Redskins draft Tagovailoa is if new head coach Ron Rivera and offensive coordinator Scott Turner want their own guy and don’t have much confidence in Haskins being the starter moving forward.

Las Vegas Raiders, +1500 - The Las Vegas Raiders have the 12th overall pick in the draft, so they’d have to put together a hell of a trade package to move up high enough to get Tagovailoa. The Raiders also have two starting quarterbacks in Derek Carr and Marcus Mariota, so there’s reason to question where he’d fit if he was selected. However, the Raiders have officially moved to the city of bright lights and flashiness, and there wouldn’t be a splashier move that gains attention than putting all the chips in the middle of the table for Tagovailoa.

Detroit Lions +1600 - The Detroit Lions are in a comfortable spot to get Tagovailoa at the third overall pick, but a lot of that has to do with how they feel about Matthew Stafford, who is still pretty productive and only 32 years old. Stafford is still under contract for another two years and trading him wouldn’t be easy. Assuming Stafford stays put, he's going to be the starter. You could also argue that the Lions have more holes to fill than only settling on a young quarterback, so they’re a team that could benefit greatly by snagging a few extra picks by trading down.

Pick: The Miami Dolphins are going to and should draft Tagovailoa by any means. Whether that’s waiting things out and getting him at the fifth pick or putting a trade package together and moving up to the second or third pick. The Dolphins have unlimited draft capital to pull off any trade needed to get Tagovailoa, and they simply need him more than any other franchise. The Dolphins haven’t had a quarterback since Marino and have only drafted one quarterback in the first round since he’s retired. The Dolphins can no longer afford to play things safe and hope these shaky draft prospects pan out. Get the guy with ridiculous potential and the best quarterback in the draft as long as he’s healthy.

The Dolphins finally get their quarterback.

The pick in this article is the opinion of the writer, not a Sports Chat Place site consensus.
Previous Pick
Who Are The NFL Quarterbacks With the Most Interceptions In A Game?
Next Pick
Seattle Seahawks 2020 Win Total - NFL Pick, Odds and Prediction