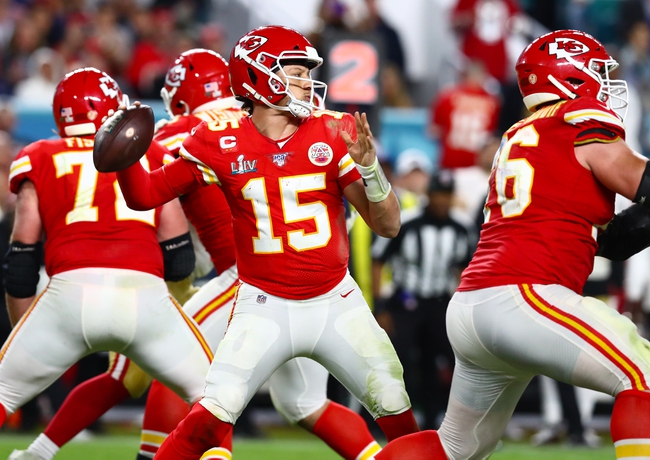 The Kansas City Chiefs come into the 2020 season as something they hadn’t been for the last 50 years, the defending Super Bowl champions after finishing the 2019 season with a 12-4 mark, their 5th straight double-digit win season and 4th straight AFC West division title. Patrick Mahomes won Super Bowl MVP honors in his first of what is sure to be multiple title games in his career, and the Chiefs look primed and ready to make another run in 2020. Get Free NFL Picks and NFL Predictions for every game all season long at Sports Chat Place.

Additions: The Chiefs mainly took an “if it ain’t broke, don’t fix it” mentality towards adding to their roster for the upcoming season, with the biggest move coming in the form of adding some backup depth behind Mahomes, singing former Ole Miss QB Jordan Ta’amu to a one-year deal. Ta’amu was having a solid season in the resurgent XFL, completing 72% of his passes for 1,050 yards, 5 touchdowns and 2 interceptions for the St. Louis BattleHawks, leading St. Louis to a 3-2 record before the XFL suspended operations for the remainder of their opening season as a result of the coronavirus pandemic.

Subtractions: The Chiefs moved on from some of the pieces that they acquired on the way to hoisting the Lombardi Trophy, as KC parted ways with Darron Lee who had the worst statistical season of his career in his lone season in Kansas City, posting just 31 tackles with only 2 starts after starting 27 combined games in the previous two seasons combined. Terrell Suggs barely made any noise other than from a name brand perspective as he had a sack and 3 tackles in two games after being traded from Arizona and the LeSean McCoy experiment in a Chiefs uniform didn’t pan out fully, but he did have 465 rushing yards and 4 scores for Kansas City last season.

Outlook:  At the time of posting this, the Chiefs come in with this highest win total line at 11.5, but the thing is that the Chiefs are capable of breaking through that. KC has had 12 wins in 3 of their last 4 seasons, and the scary thing is that Kansas City just appears to get better and better as the years go on, and Mahomes is going to be a big part of why that will continue to be the trend for years to come. I think a regression, even the slightest one back to 11 wins would be more surprising than seeing the Chiefs surpass their 12 wins from the past couple of seasons, so I’ll side with the over as I think this could easily be a 13-3 team at the very least.