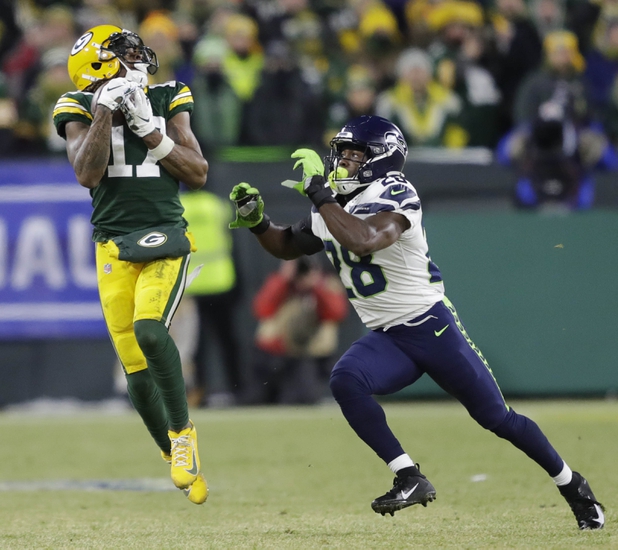 The Seattle Seahawks and the Green Bay Packers meet in a Madden 20 Simulation game on Sunday evening.

The Seattle Seahawks enter this game with a 3-0 mark after picking up a 17-12 win over the San Francisco 49ers in their last outing. Russell Wilson is the leader on the offensive side of the football as a 91 overall rated QB, with a pair of 89 grades in throwing power and medium pass accuracy with low-90s ratings in short and deep ball accuracy. Wilson also owns a level of elusiveness as well with an 86 speed rating as well as 90 in acceleration and 93 in agility. Chris Carson isn’t far off the pace at 87 overall with 88 speed and 89 acceleration as ell as a 90 stiff arm rating, meaning he can push for some serious yards after contact when called upon. Tyler Lockett also leads Seattle’s receiving group at 87 overall, Lockett the Rockett as I like to call him and a name I’m sure he’s gotten at some point in his life/career, Lockett has a 93 speed rating and a 97 agility grade as well as a 92 catching rating. Defensively, Bobby Wagner is one of the elite Madden pieces with the coveted 99 overall rating. Wagner boasts a 99 tackling rating, a 98 power mark as well as a 92 rating in block shedding.

The Green Bay Packers come into this one at 3-2 in the simulation matchups after being beat up by Dallas last time out by a final score of 49-29. Davante Adams is the top rated player for Green Bay with a 92 overall rating, including 93 catching, 94 catch in traffic and a 96 release grade while Aaron Rodgers comes in at 90 overall with a 94 throw power mark as well as a 96 grade in short pass accuracy and a 91 rating in accuracy throwing deep. Aaron Jones is one of the game’s more underappreciated running backs, posting an 82 overall rating despite having 90 speed, 93 acceleration and agility as well as 90 carrying, so he’s not going to fumble the rock often. Defensively, Kenny Clark anchors the front as a 90 overall defensive tackle with 95 strength and 94 block shedding. Adrian Amos owns the secondary at strong safety and 87 overall with an 89 rating in zone coverage as well as 93 speed and 92 acceleration.

These sim games are pretty much a coin flip a lot of the time, and this game is no different. The fact that there’s going to be snow here muddles things up as well, as snow would be a huge factor in real life, but in these sim games, I’ve seen a couple of shootouts in the snow. With that said, I’m going to side with Seattle here as I just like what the Seahawks have shown up to this point. Green Bay has been hit or miss, and I don’t think that can be taken lightly against a pretty good Seattle defense. Getting the Packers as a home dog is something I’d have a hard time passing up, but in the sim, I feel a little bit better about Seattle. I’m also going to side with the under as I see this being a game played in the low 20s but my stronger play of the two would be laying the points with the Seahawks.