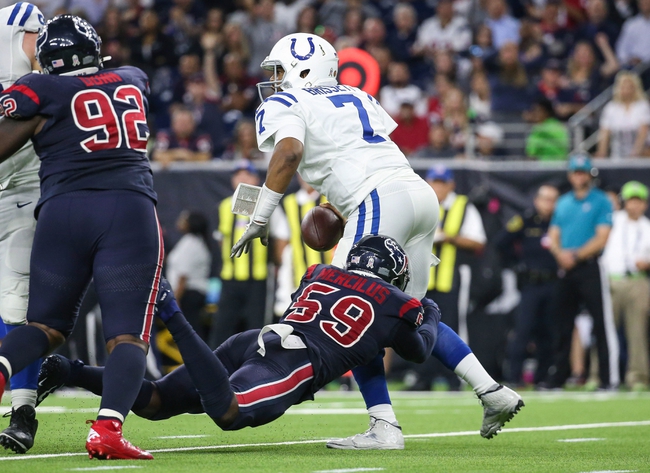 The Houston Texans and the Indianapolis Colts meet in an AFC South division matchup in a Madden NFL 20 simulation game on Sunday.

The Houston Texans up to this point have lost their first two matchups, both to the Tennessee Titans, losing the first matchup 34-10 and then the rematch in their last outing by a final score of 30-24. Deshaun Watson leads the Texans under center with his 86 overall rating, with an 89 throw power attribute as well as accuracy ratings across the board in the mid- to high-80s. DeAndre Hopkins is still with the team in the game, sitting with a 98 overall ranking at wideout with a 98 catch rating as well as 99s in catching in traffic, spectacular catch, release and jumping as well as low 90s ratings in speed, acceleration and agility. Defensively, JJ Watt is the mainstay and anchor at 97 overall with a 97 tackle rating as well as mid-90s marks in finesse moves and power moves along the defensive line. Watt also has an 89 mark in terms of block shedding. Up to this point, Houston is scoring 17 PPG and allowing 32 PPG.

The Indianapolis Colts have only played once up to this point, losing a 30-24 decision to the Los Angeles Chargers in their last time out. T.Y. Hilton is the stud on the offensive side of the ball for the Colts, boasting an 88 overall rating, with a 93 speed rating as well as a 95 mark in agility and 91 in acceleration. The Colts also have some beef protecting the QB with four offensive linemen with at least an 80 overall rating, including Quenton Nelson who has a team-high 94 overall rating with a 99 grade in awareness as well as a 97 strength rating and a 92 run block rating. Defensively, the top dog is Justin Houston who sits at 86 overall, including a 93 mark in play recognition while Darius Leonard occupies one of the outside linebacker spots with an 85 overall rating including an 88 grade in tackling.

The Texans showed some grit in the second loss, fighting back from 16-3 down at the half to make a game of it and only lose by a single score. The problem is that the Texans have been torched by the Titans twice for at least 30 points, and that’s a bit surprising for a team with an 88 overall ranked defense like the one Houston has. On the other side, I’m really not trying to back a Colts team with Jacoby Brissett leading the charge as a 72 overall, and side-by-side, I think the Texans are the better team who just had a couple of bad games against Tennessee. I think Houston gets off the schneid here, so I’ll side with Houston and the free point on the road here.