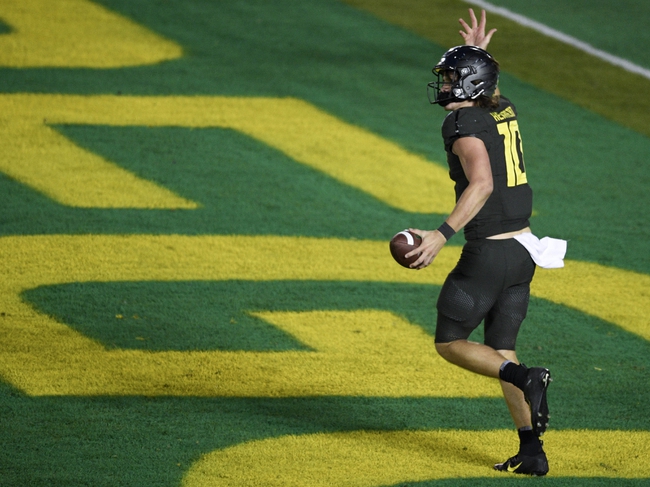 Justin Herbert is expected to be one of the first quarterbacks selected in the 2020 NFL Draft and a first round pick. While Herbert probably isn’t Joe Burrow or Tua Tagovailoa, there are things to like about him and he does have the potential to be a franchise quarterback for an NFL franchise.

College Career: Herbert played four years for the Oregon Ducks where he completed 64 percent of his passes for 10,541 yards, 95 touchdowns and 23 interceptions. Herbert also had 560 rushing yards and 13 rushing touchdowns. Herbert led Oregon to a 17-7 record whenever he had 250 or more passing yards.

Strengths: Herbert makes good decisions with the football, as he never had a season with double-digit interceptions and he has the ability to fit the ball into tight windows. Herbert has decent arm strength and is quite accurate with the football, even if the zip isn’t always there. Herbert is an above-average athlete and his speed in the open field can take defenses by surprise. Herbert throws well on the run and isn’t afraid to take a hit, especially when it requires him to step into a throw. Herbert also had some of his better games against quality competition and playing on the road didn’t seem to bother him.

Weaknesses: Herbert struggled with consistency throughout his career and it led to Oregon underachieving. One minute Herbert looks like the best quarterback in the country, the next he’s struggling with accuracy and allowing Oregon to bow out quietly. Some question Herbert’s leadership and if he’s capable of being the alpha male to carry a team. Herbert can be a bit panicky in the pocket at times and show happy feet. Herbert also comes from the Pac-12 where there’s been a million quarterbacks who put up the numbers and look the part but rarely pan out at the NFL level.

Possible Fits: If the Miami Dolphins miss out on Burrow or Tua, they could turn their attention to Herbert. The Dolphins have needed a starting quarterback ever since some guy named Dan Marino decided to hang them up. The Los Angeles Chargers don’t have a starting quarterback on their roster and need something of promise to fill a new stadium. The Carolina Panthers need a longterm solution at quarterback with Cam Newton no longer around. The Indianapolis Colts could be in the quarterback market as Philip Rivers won’t be around long, and they’ve had success with a Pac-12 quarterback previously, but they’d certainly have to move up to get him.