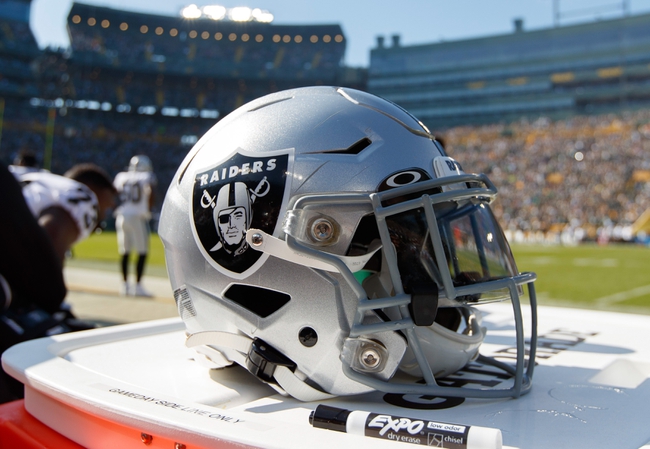 The Raiders prepare for their first season in Sin City, now christened the Las Vegas Raiders after finishing their final season in Oakland with a 7-9 record and missing the playoffs for the 16th time in the last 17 seasons. Get Free NFL Picks and NFL Predictions for every game all season long at Sports Chat Place.

Additions: The Raiders made a huge splash in free agency, strongly bolstering some defensive positions including a pair of linebackers in Nick Kwiatkoski and Cory Littleton. Littleton made a massive splash with the Rams over the last couple of seasons, starting all 32 games while totalling 7.5 sacks and 259 total tackles, including a career-high 134 total tackles last season. Kwiatkoski on the other hand, logged career-highs of 76 total tackles, 56 solo tackles and 3 sacks for the Bears last season and will get his chance to prove himself for the new-look Raiders. The Raiders also signed Damarious Randall after a pair of career years in Cleveland, logging a career-high 85 total tackles in 2018 and 2.5 sacks and 61 total tackles in just 11 games in 2019 for the Browns.

Subtractions: The lone noteworthy subtraction from last year’s Raiders team is a big one, and one that I don’t think we can overstate as Tahir Whitehead is no longer in the Raiders’ linebacking corps, prompting the signings of Littleton and Kwiatkoski. Whitehead had two of his best career years in a Raiders uniform after spending his first six seasons in Detroit, with Whitehead combining for 234 total tackles over two seasons, including 168 solo tackles while starting all 32 games for the black and silver last season.

Outlook: The Raiders are always a tough team to figure out, and with Derek Carr under center, it never gets any easier, as the guy has shown he can play, but the Raiders just don’t seem to win with him as their guy. Maybe a change of scenery will help and maybe lighting a fire underneath him with bringing in Marcus Mariota will help give Carr that extra push. What Oakland is missing is a stud receiver, but with two 1st-round picks in the top 20 of the NFL draft, there’s no reason why the Raiders can’t pick up at least one or two star receivers for the future. If that ends up being the case, I think the future could look bright for Sin City’s first NFL team. I think we see at the very least a little bit more improvement in Jon Gruden’s 3rd season in charge, and at worst a .500 record, so I’ll side with the over in the Raiders’ win total market.