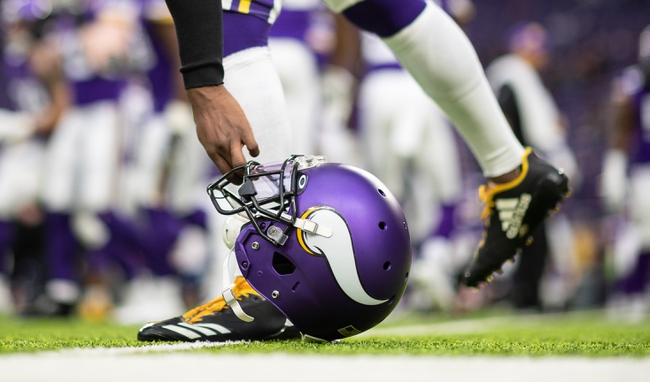 The Minnesota Vikings come into the 2020 season looking to build on a fairly successful 2019 campaign that saw the Vikings made it to the playoffs for the 3rd time in 5 seasons with a 10-6 record, but the Vikes would still flame out and fail to reach the title game for the first time since 1976. Get Free NFL Picks and NFL Predictions for every game all season long at Sports Chat Place.

Additions: The Vikings didn’t made the biggest splashes in free agency, as there were glaring needs like ones on the offensive line, but the Vikings bring in rotational help like Tajae Sharpe on offense as well as Anthony Zettel and Michael Pierce on defense. In reality, these are players that may help and Sharpe has the biggest upside after Minnesota traded away one of their best receivers but as of right now it’s hard to envision these guys making a significant impact in the coming year.

Subtractions:  It’s to be expected that the signing of Sharpe had to have been to make up for the trading away of Stefon Diggs to the Buffalo Bills just a few weeks ago. Diggs was the lone 1,000-yard receiver for the Vikings with the returning Adam Thielen missing 6 games due to injury, and the loss of Diggs will significantly impact the consistent production of the Vikings without a second go-to receiver in the staff.

Outlook: The Vikings still have some good pieces like Kirk Cousins, Dalvin Cook and Kyle Rudolph to go with the aforementioned Adam Thielen, and the defense is still pretty good. However, trading away Diggs may have helped Minnesota get some draft picks, but as of right now, Minnesota got worse before they got better and I can see the Vikings barely making it to .500 this season. It’ll be close, but I think this is a 7-8 win Vikings team at best, so I’ll take the under on this win total.