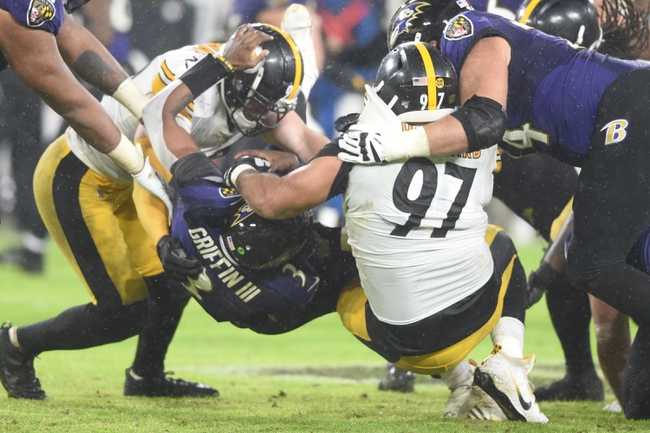 The Baltimore Ravens and the Pittsburgh Steelers meet in an AFC North division clash to round out the slate of games in Sunday’s Madden 20 sim schedule.

The Baltimore Ravens come into this game with a 2-0 record with a 39-26 win over Chiefs in their last outing. The Ravens also own a 30-24 win over the Steelers earlier this season. It’s crazy to think that the Ravens, the team that finished tops in the AFC in the regular season, have Mark Ingram II as their best offensive non-lineman on the team at 86 overall. Ingram II is shifty, with 89 carrying and a 91 juke rating, but he also has 88 speed and 91 acceleration. Willie Snead IV and Marquise “Hollywood” Brown are 78 and 77 overall respective, and Lamar Jackson is a jaw-dropping 76 overall with speed, acceleration and agility ratings all in the mid-90s. The Ravens are stacked on defense as well, with Earl Thomas III leading the Ravens at 95 overall from the free safety spot with a 98 zone coverage rating as well as 80 catching, 89 speed, 91 acceleration and 93 agility. Michael Pierce has a 92 overall rating, including 96 strength, 95 block shedding and a 90 rating in impact blocking.

The Pittsburgh Steelers sit at 1-2 in the simulation games after a 41-20 loss to the Green Bay Packers in their last outing. JuJu Smith-Schuster leads the offense for Pittsburgh with an 88 overall rating, including 91 speed and 92 acceleration as well as a 94 catching grade and 93s in catching in traffic and spectacular catching. Ben Roethlisberger comes in at 85 overall with 91 throw power and high 80s rankings in accuracy all over the field. James Conner comes in at 83 overall with an 86 trucking grade as well as 89 carrying and 89 acceleration. Defensively, Cameron Heyward is the top defender for Pittsburgh, sitting at 86 overall with 93 strength and 86 block shedding while Stephon Tuitt is right behind on the other side with an 85 overall rating and an 89 impact blocking rating.

These sim games can be funny, as you have a team like Baltimore rated so poorly, despite being one of the best teams in the league this season, and even rated how they are, they’ve still come out of the blocks strong. Pittsburgh on the other hand, has some decent pieces, and Smith-Schuster is the highest rated offensive skill player on both sides, but the Steelers have lost the games they should hang in on paper (including the first loss to Baltimore), but then they go and blow out the Chiefs by 4 touchdowns a couple of games ago. All in all, it’s really hard for me to pick a side here, because it wouldn’t surprise me if either side not only covered, but won as well. Instead, I’m going to side with the under. This game is slated to be played in the rain, and while I don’t think it has the same critical effect it does in reality, I do think this ends up being a defensive battle that finishes around 40-45 points, may even go into the high 40s, but I don’t see it breaking 50, maybe 28-21 or something along those lines so give me the under.