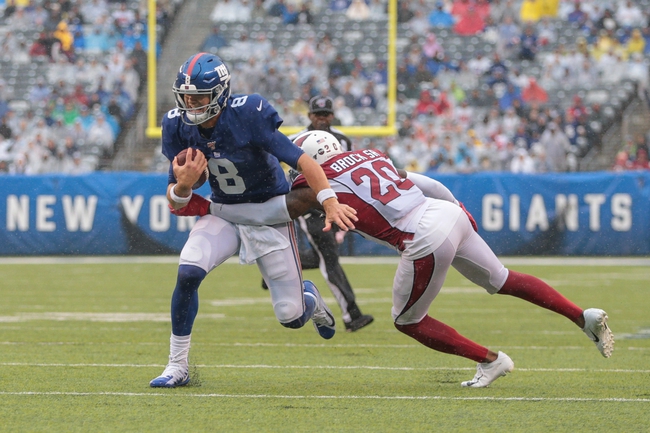 The New York Giants and the Arizona Cardinals meet in a Madden 20 simulation game on Monday night.

The New York Giants come in at 0-3 after a 35-14 loss to the Philadelphia Eagles in their last outing, leaving the G-Men still hunting for their first win. Saquon Barkley leads the Giants with a team-high 89 overall rating at running back with 94 ratings in carrying and juke move as well as low- to mid-90s ratings in speed, acceleration and agility. Evan Engram is right behind at 88 overall with a 90 speed rating and 91 acceleration. Golden Tate III and Sterling Shepard made up the top two receiving options at wideout at 83 and 82 overall respectively, while Daniel Jones comes in at a measly 70 overall at starting QB. Defensively, Leonard Williams leads the edge rush at 82 overall with a 90 strength rating and 88 marks in impact blocking and tackling.

The Arizona Cardinals will be on the hunt for their first win as well after losing their lone sim game up to this point by a final score of 27-16 at the hands of the San Francisco 49ers. Larry Fitzgerald remains the constant in the Cardinals’ receiving group with an 83 overall rating as well as low-90s marks in catching, catching in traffic and spectacular catch while Kenyan Drake sits as the Cardinals’ top running back at 81 overall with a 91 speed rating along with 87 carrying and 89 juke. Kyler Murray comes in as starting QB with a 75 overall rating, which isn’t much better than his Giants’ counterpart Daniel Jones, along with low-90s grades in speed, acceleration and agility as well. Murray also has an 89 throwing power attribute in addition to his mobility traits. Defensively, the Cardinals hold their stronger players like Chandler Jones, who boasts a 90 overall mark with a 92 power move rating and 86 in finesse moves as well as 87 impact blocking and 86 tackling. Patrick Peterson is 88 overall with high-80s marks in both types of coverage as well as stellar 92 ratings in speed and acceleration and a 95 agility mark.

Normally, with a line like this, I’d say someone maybe knows something, and anything can happen in these sims which can be a coin flip game or can end up in a complete blowout. However, aside from Saquon Barkley, there’s nothing that wows me about the Giants at all. Granted, we haven’t seen much of a sample size from the Cardinals, but what we have seen from New York is that the Giants have been blown out of the water more often than not and have lost their last two games to subpar division foes by a combined score of 86-24. It may sound like an obvious statement, but ratings really do matter in this game, and I don’t see a QB like Daniel Jones at 70 overall, making plays downfield against Cardinal defenders like Chandler Jones and Patrick Peterson. The Cardinals aren’t world-beaters on offense, but I’ve seen nothing so far that should suggest the Giants be favored by this many points on the road, if at all. Give me the Cardinals and the points in a game I think Arizona wins outright.