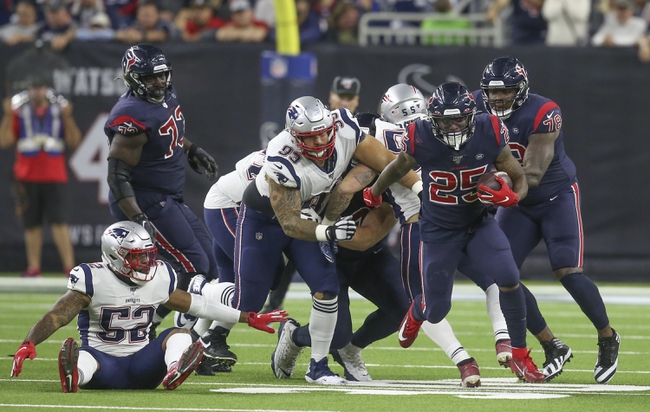 The New England Patriots and the Houston Texans meet in a Madden 20 Simulation game on Monday afternoon.

The New England Patriots lone game in the Madden 20 sim era came in the form of a 45-38 victory over the Kansas City Chiefs in their last outing. He may not be a Patriot anymore, but Tom Brady remains the stud on the Patriots’ offense with a 96 overall rating including 91 throwing power, 99 short pass accuracy and 98 medium pass accuracy. Julian Edelman has an 89 overall rating with 88 catching and 87 catching in traffic while James White and Sony Michel provide a solid 1-2 punch for the Patriots in the backfield, with White coming in at 86 overall and Michel coming in at 84 overall. Defensively, Stephon Gilmore leads the Pats with a 94 overall rating, including 94 acceleration and 94 agility while Devin McCourty is holding it down at free safety with an 89 overall mark including 90s across the board in speed, acceleration and agility.

The Houston Texans come into this one fresh off of their first win in the form of a 32-31 win over the Indianapolis Colts in their last outing to improve to 1-2 in sim matchups so far. Deshaun Watson leads the Texans at QB at 86 overall with an 89 throw power rating as well as accuracy ratings in the mid- to high-80s in all aspects. DeAndre Hopkins is still with the Texans in Madden 20, coming in with a team-high 98 overall ranking at WR with a 98 catch rating as well as 99s in spectacular catch, release, catching in traffic and jumping as well as low 90s ratings in speed, acceleration and agility. Defensively, JJ Watt is the man at 97 overall with a 97 tackle rating as well as mid-90s ratings in finesse moves and power moves and an 89 rating in block shedding along the defensive line.

A lot of these sims are coin flips and I’ve said that before both in game articles and in our live show, but the truth is that while I’d normally give the Texans and a free field goal at home a look in real life, the thing here is that the Patriots are a much better team in Madden than what they really showed in live action this season, as the offense looked like the 2007 Patriots that almost went undefeated and racked up points left and right when they took on the Chiefs. There are just certain teams that you have to keep an eye on as an exaggeration in the video game, good or bad, and it can make you some solid money and the Patriots in Madden 20 are most likely one of those teams. I’ll lay the field goal with New England here.