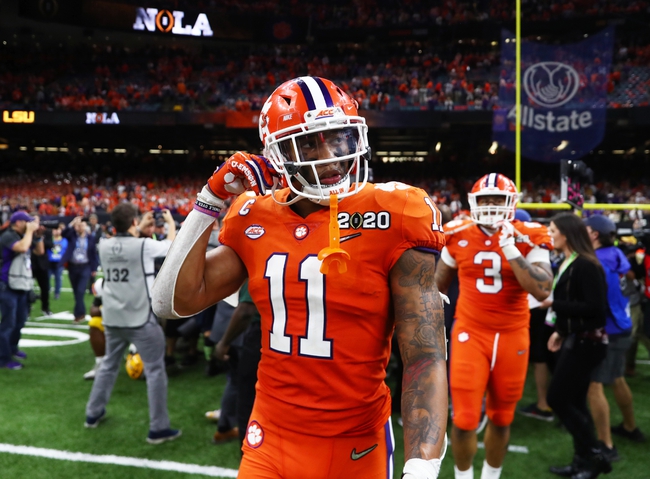 Isaiah Simmons is expected to be one of the first defensive players selected in the 2020 NFL Draft, as he’s a versatile player who spent time at cornerback, defensive end, safety and linebacker with the Clemson Tigers.

College Career: Simmons spent four seasons at Clemson where he racked up 148 solo tackles, 28.5 tackles for loss, 11 sacks, four interceptions and 20 pass deflections. Simmons won the ACC Defensive Player of the Year in 2019 as well as the Butkus Award, which is given to the best linebacker in the country.

Strengths: The first thing you notice about Simmons is his versatility and football IQ, as he took at snaps at four different positions and there’s not many players who can grasp the assignments it takes at each spot. Simmons is a hell of an athlete with elite speed to cover sideline to sideline, and he ran a 4.39 at the NFL combine. Simmons is effective in run defense and is effective at dropping back into pass defense as a linebacker due to his athleticism and closing speed. Simmons tackles well in the open field, has some physicalness to his game and is no stranger to complex blitz packages. Simmons also has experience on special teams, which is always valuable to NFL clubs.

Weaknesses: The main issue with Simmons is he can do a better job of shedding blocks, as there’s been a lot of times in his career where he gets stuck on the tight end and can’t break free. Simmons is also probably a better fit at outside linebacker due to his athleticism, really limiting his potential at middle linebacker.

Possible Fits: The Las Vegas Raiders have needed a difference maker at linebacker for quite some time and Simmons seems like the type of guy Jon Gruden would fall in love with. The Cleveland Browns need a linebacker with Joe Schobert leaving for the Jacksonville Jaguars. The Arizona Cardinals were horrible in pass defense last season and showed little promise at the linebacker position. The Miami Dolphins also have to be on the list simply due to them having three first round picks and needing to find talent across the board.