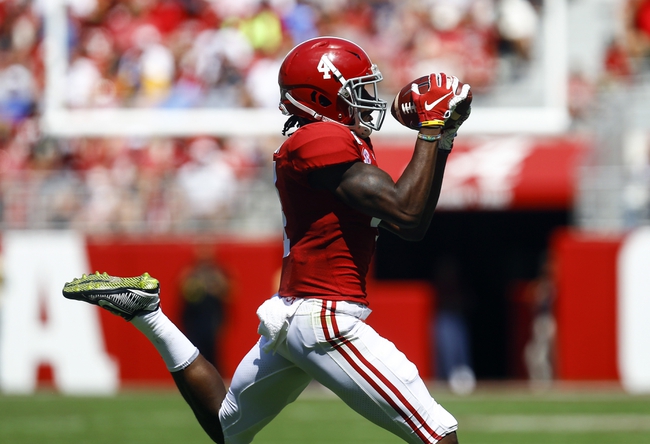 Jerry Jeudy is a talented and accomplished wide receiver from Alabama who should make a big splash in the 2020 NFL Draft. He’s put up some excellent stats over the past couple of seasons, and odds are he’ll be the first or second receiver off the board in the opening round of the draft. Jeudy has plenty of consistency and speed at his disposal, and should be able to jump right in as an impact player for the NFL team that selects him.

Strengths: Scouts are raving about Jeudy’s top-end speed. He’s a dangerous threat to a secondary, and likely will be one of those players that other teams specifically have to game-plan against. He’s a very good route-runner and stays consistent from snap to snap. Jeudy is versatile and has experience in pro-style combinations so the NFL learning curve here shouldn’t be too steep.

Weaknesses: The main concern with Jeudy seems to be his body type; he’s been called “slender” and “leggy,” which lead some to believe that he won’t have a lot of value between the hashmarks. Jeudy has also had some issues tracking deep throws and dropping easy passes, but with a little fine-tuning on his technique he should be able to clean that up.

Possible Fits: There are a few elite prospects who are projected to go before Jeudy, but he probably won’t last beyond the top 10 or 12 selections. If the Jacksonville Jaguars don’t take a defensive player at No. 9, he would be a good fit there. The Jaguars need to get QB Gardner Minshew some weapons, and Jeudy is an enticing option.

Provided Jacksonville goes OT or DT with their pick, the Jets are waiting at No. 11 and could really use Jeudy’s services after losing deep threat Robby Anderson to free agency. New York QB Sam Darnold doesn’t really have anyone to throw to right now.

It would be quite improbable to see Jeudy fall past the Raiders at No. 12; if he’s there Las Vegas will most likely take him. That fanbase really needs to forget about the whole Antonio Brown fiasco, and drafting Jeudy as the new franchise WR makes a lot of sense.