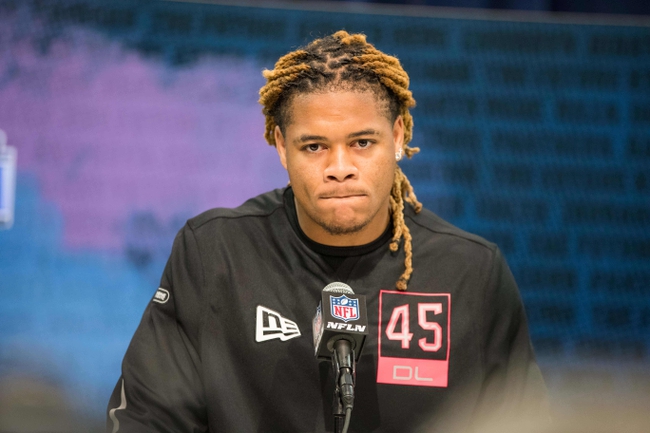 Chase Young is expected to be one of the first three picks in the 2020 NFL draft and is considered to be a generational talent at the defensive end position. Young is one of those players you draft and he produces on day one.

Strengths: Young is an elite pass rusher with a quick first step and a variety of moves to beat the lineman in front of him. Young has great size at 6’5”, 265 pounds and is a fluid athlete who uses his hands well and disrupts passing lanes. Young plays with good pad level, has good instincts and sheds blockers well to get to the ball carrier. Young is also used to playing against double teams and was still highly productive, which says a lot in itself. Young is also one of those players with a high motor, and you know he’s going to bring it every game and every play. Young doesn’t need to get motivated to play at a high level.

Weaknesses: Young will have to grow into his frame and get stronger to have the same impact at the next level against much bigger offensive linemen. Young does get fooled at times and can lose track of the ball due to being a little too aggressive. Young has to do a better job of being disciplined with his pass rushing, staying in his lanes. And if you want to nitpick, Young didn’t have much of an impact in the big playoff game against Clemson, which critics will certainly point out.

Possible Fits: There’s not a team in the league that can go wrong with drafting Young, who is a plug and play guy who should be one of the better pass rushers in the NFL for the next decade. The Washington Redskins should draft Young with the second overall pick, but if he slips for whatever reason, the Detroit Lions will pounce at the third overall pick. Bottom line is, Young is a top-three pick in this draft and is going to improve the defense right away.

The pick in this article is the opinion of the writer, not a Sports Chat Place site consensus.
Previous Pick
Derrick Brown 2020 NFL Draft Profile, Strengths, Weaknesses and Possible Fits
Next Pick
Pittsburgh Steelers vs. Cleveland Browns - 4/7/20 Madden 20 Sim Pick, Odds, and Prediction