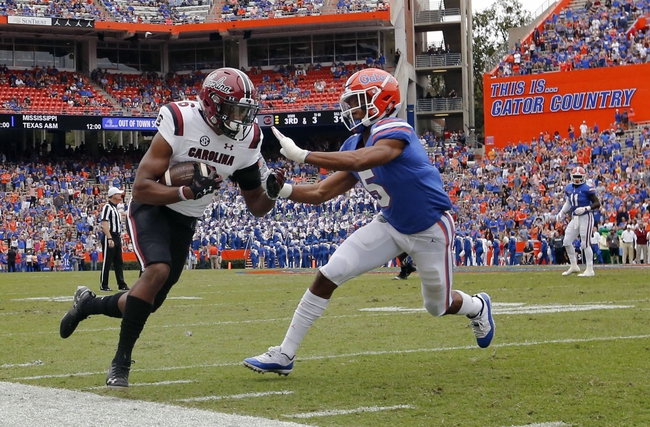 C.J. Henderson is one of the top-rated cornerbacks in the 2020 NFL Draft, and he’s projected to go pretty high in the first round. After growing up in Miami, Henderson went on to spend three years as an impact corner for the Gators, notching some nice stats and setting himself up for a place in the NFL.

College Career: Henderson initially committed to the University of Miami, but ultimately opted to play for Florida. As a freshman, he appeared in 11 games with the Gators, starting five of those. Henderson made 22 tackles and four interceptions that year, immediately proving his worth as a corner.

Strengths: Henderson’s main attribute is his strength. He’s got good size with plenty of athleticism and can press on smaller receivers with relative ease. Henderson’s hip work is pretty fluid, and there’s not much wasted movement when he’s transitioning routes.

Henderson also has a talent for following the quarterback’s eyes, enabling him to anticipate where the throw is going. He has plenty of patience and poise, and can stick with a receiver through the end of most plays without too much difficulty.

Weaknesses: Henderson may have issues with the bigger and tougher NFL receivers who jam up with him off the line. His posture and balance come into play here, and he’s not always adept at pushing through those messes with optimal physical technique.

When Henderson gets turned around, he sometimes has issues recovering and can’t find the football. This can become troublesome in a zone coverage, as Henderson sometimes loses his receivers in certain setups. As with his downhill tackling control, many of the aforementioned issues can be cleaned up with a little quality coaching.

Possible Fits: Many mock drafts have Henderson landing somewhere in the middle of the first round. He probably won’t be the first cornerback off the board in 2020—that’ll be Jeff Okudah in all likelihood—but most outlets have him going second or third at worst.

A good spot for Henderson to land would be Atlanta. They’re sitting at No. 16 in the first round and could use some major upgrades in their secondary to complement a strong Falcons offense.

That said, Henderson may not even make it to No. 16. Tampa Bay has the No. 14 pick, and with a new-look offense (hello, Tom Brady) and a great defensive interior (Ndamukong Suh and Vita Vea), it makes a lot of sense for the Buccaneers to grab a CB here who can come right in and contribute. The window for success in Tampa is pretty short, so they may go high-upside, which Henderson certainly is.

The Cowboys have an outside shot at having Henderson available by the time they pick at No. 17, and if he’s there I imagine Dallas will take him. Still, Atlanta or Tampa Bay are probably the more likely scenarios here if we don’t see some weird trade shakeups.