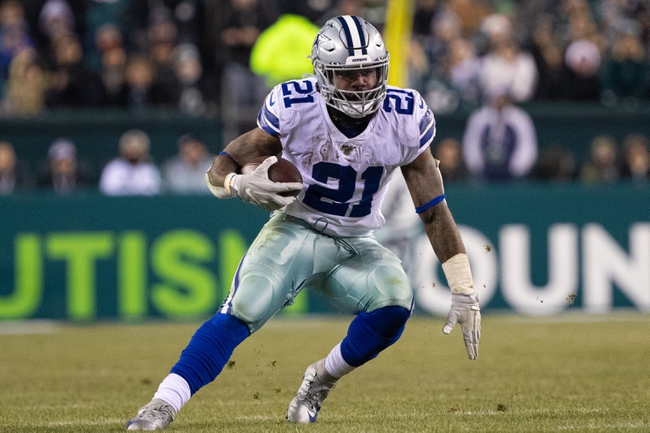 The New England Patriots and the Dallas Cowboys meet in a Madden 20 simulation game on Tuesday night.

The New England Patriots enter this game with a sim record of 1-1 fresh off of a 38-17 loss to Houston last time out. Tom Brady isn’t on the Patriots in reality anymore, but until next year’s game, he remains a Patriot leading the offense at 96 overall with 91 throwing power, 99 short pass accuracy and 98 medium pass accuracy. Julian Edelman comes in at 89 overall with an 88 catch rating and 87 catch in traffic while James White and Sony Michel provide New England’s backfield with a strong tandem, with White at 86 overall and Michel at 84 overall. Defensively, Stephon Gilmore leads New England’s unit with a 94 overall rating, including 94 acceleration and 94 agility while Devin McCourty owns an 89 overall mark at free safety including 90s in speed, acceleration and agility.

The Dallas Cowboys enter this game with a 3-1 overall sim record following a 49-29 win over the Green Bay Packers last time out. Ezekiel Elliott leads the charge for the Cowboys offense at 93 overall with 90 speed, 91 acceleration and 95 agility while Amari Cooper isn’t far behind, leading Dallas’ receiving corps with a 91 overall rating including 89 catching, 92 speed and 96 agility. Dak Prescott is at 81 overall, but with 87 throwing power and 88 short pass accuracy he’s still a viable QB in the game. The Cowboys also have some solid offensive linemen, with Zack Martin sporting a team-high 97 overall rating while Tyron Smith is at left tackle at 91 overall. Defensively, Byron Jones and Demarcus Lawrence lead the Cowboys’ defense at 88 overall respectively, with Lawrence boasting a 93 finesse move, 89 power move and 88 block shedding rating while Jones has 92 speed, 94 acceleration and 96 agility to go along with an 84 man coverage rating and 90 zone coverage rating in the secondary for Dallas.

Normally I see the Patriots getting points and I’m all over it like white on rice. The problem is that anything can happen in these simulation games, and the Patriots’ defense isn’t what it was in reality on the real field this season, as the Pats were torched by Houston. Dallas is one of those teams that was average on the field, but also a team that Madden absolutely loves. The Cowboys have had 4 sim games so far, the 3rd-most of any team, and the Cowboys are outscoring teams by 17 points per game and are putting up 35.7 points per game in these simulations. I wouldn’t be surprised with either result, but based on what we’ve seen so far to this point, Dallas laying the field goal seems to be the play here.