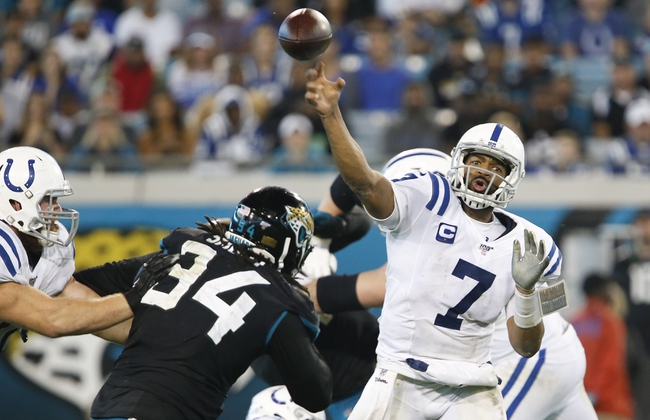 The Indianapolis Colts and the Jacksonville Jaguars meet in an AFC South division matchup in a Madden 20 simulation game on Tuesday afternoon.

The Indianapolis Colts come into this one looking for their first sim victory, sitting at 0-2 right now after a narrow 32-31 loss to the Houston Texans in their last outing. T.Y. Hilton is the top guy on offense for the Colts with an 88 overall attribute rating, with 93 speed in addition to a 95 mark in agility and 91 grade in acceleration. The Colts also have some solid muscle up front with four offensive linemen with at least an 80 overall rating, including Quenton Nelson who has a team-high 94 overall rating with a 99 awareness rating as well as 97 strength and 92 run blocking. On defense, Justin Houston anchors the front at 86 overall, including a 93 mark in play recognition while Darius Leonard takes up one of the outside linebacker spots with an 85 overall rating including an 88 grade in tackling. Up to this point, the Colts are averaging 27.5 points and allowing 31 points per game.

The Jacksonville Jaguars come into this game looking to build on their 2-0 start to simulation play after picking up a 26-19 win over Tennessee in their last time out. Leonard Fournette leads the offensive group at an 83 overall rating with 92 speed and 96 carrying, so good luck to the Colts trying to pry the ball from his hands. D.J. Chark Jr. sits at 81 overall in the receiving corps with 91 catching as well. Defensively for Jacksonville, the three levels of defense each have an 84 overall rated player at the level with A.J. Bouye holding down the secondary, Telvin Smith in the linebacking corps and Yannick Ngakoue on the pass rush. Bouye boasts an 89 speed rating with 94 acceleration and 91 agility while Smith has 87 speed with 89 acceleration and 88 agility.

I like a good home dog as the next guy, and Jacksonville’s looked good in their first couple of games, but I’m not feeling the Jaguars with Nick Foles or Gardner Minshew under center as Foles is only rated 71 overall and Minshew is 69 overall. On the other hand, Jacoby Brissett is only a 72 overall for Indy. Real logic would suggest a game that’s mostly played on the ground with those numbers, but I don’t see it so I’m expecting a lot of missed plays and for there to be a relatively low-scoring game for a simulation, which is why I’m siding with the under in this spot.