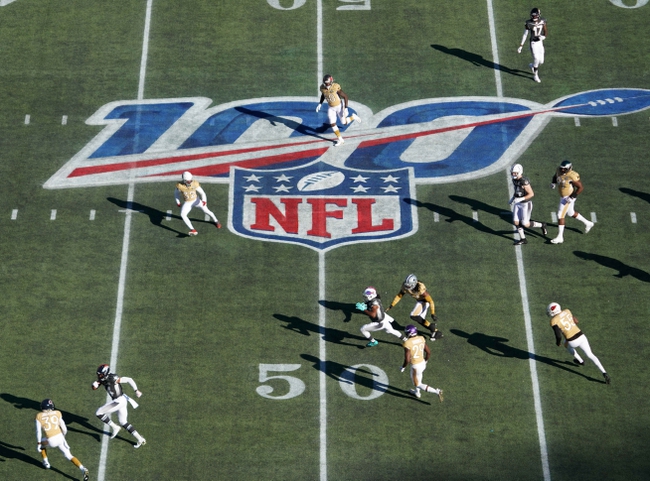 The New England Patriots and the Buffalo Bills meet in an AFC East division matchup in a Madden 20 simulation game on Wednesday evening.

The New England Patriots come into this one at 2-1 after a 40-37 overtime win over Dallas in their last game. Tom Brady still isn’t on the Patriots, but for now, in this game,  he remains a Patriot leading the offense with a 96 overall grade, with 91 throwing power, 99 short pass accuracy and 98 medium pass accuracy. Julian Edelman comes in as the top wideout at 89 overall with 88 catching and 87 catch in traffic while James White and Sony Michel provide New England’s backfield with a solid duo, with White at 86 overall and Michel at 84 overall. Defensively, Stephon Gilmore leads New England’s D and secondary with a 94 overall rating, including 94 acceleration and 94 agility while Devin McCourty is 2nd in the group with an 89 overall attribute rating at free safety including 90s marks in speed, acceleration and agility.

The Buffalo Bills come into this sim matchup with an 0-2 record after a 16-10 loss to the Miami Dolphins last time out. Cole Beasley and John Brown remain the top skill players on offense for Buffalo with both receivers coming in at 83 overall, with Brown being the faster of the two with 92 speed and 90 acceleration while Beasley holds a 92 agility edge over Brown. Frank Gore and Devin Singletary share the running back duties at 80 overall, while Josh Allen checks in at 77 overall at quarterback. Defensively, the secondary is Buffalo’s greatest asset with Micah Hyde and Tre’Davious White coming in at 88 overall, with White logging 91 speed and 93 acceleration at corner while Hyde has a 91 zone coverage rating at free safety. Jordan Poyer is at 85 overall at strong safety while Lorenzo Alexander is a solid 83 overall at one of the outside linebacker positions.

I think there’s a case to be made for Buffalo getting the points at home, as the Patriots’ stellar defense hasn’t translated into these simulations, with New England allowing 37 PPG in their three games. With that said, the Patriots are also the far better team offensively, and while Buffalo’s defense has been their strength, I just can’t see Allen and the low-rated Bills offense making enough plays to keep pace with New England. If you have trouble with Miami and the Jets, you’re going to have issues with New England, simulation or not. I’ll lay the points with the Patriots here.