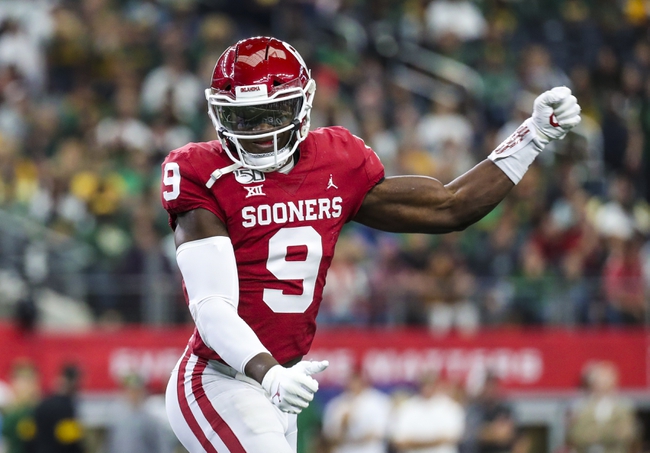 Linebacker Kenneth Murray is set to be a first-round selection in the 2020 NFL Draft, and whichever team selects him will get an instant upgrade to their defense. Murray put up great numbers with Oklahoma and has starter-level talent for the NFL; he should be able to contribute right away as a professional.

College Career: Murray played three seasons with Oklahoma and chose to forego his senior campaign and declare for the NFL Draft this year. As a freshman, he notched 68 total tackles with 1.0 sacks, a forced fumble and 7.0 tackles for loss in 13 games played.

Strengths: Murray has some major playmaking abilities, and he showcased his skills during his three seasons as a Sooner. He’s got a great sideline-to-sideline game, and that lateral movement helps keep opposing offenses in check at that second level.

When he’s out in space, Murray’s speed really shines through; he’s got safety-like movement in space and can close out gaps in a hurry. Murray is very quick off the snap and has a great nose for finding running lanes and stuffing ball-carriers for losses. All things considered, he’s got a great ceiling as an NFL linebacker.

Weaknesses: Murray is a fiery, intense player and may need to learn some patience at the professional level when it comes to waiting on plays to develop. In NFL games, experienced blockers know how to erase a linebacker from gaps and angles, so Murray will need to balance his raw talent with a heavy dose of tape study and technique. Some scouts have raised issue with his open-field tackling, citing a lack of balance and overall control in certain situations.

Murray needs to fine-tune his game with some coaching and development, but he’s got all the natural tools to be successful.

Possible Fits: It’s looking like a run on linebackers and defensive tackles will begin to shake out around No. 9 or so in this 2020 NFL Draft, and we should see a bunch of defensive guys in the teen-level picks. The Jacksonville Jaguars are sitting at No. 9 and that’s where the discussion of Murray will likely heat up. Depending on how things play out, Jacksonville may take a CB at that spot, or they could go with Isaiah Simmons from Clemson—he’s the major competition for Murray when it comes to early LB selections of the evening.

Tampa Bay (No. 14) and Denver (No. 15) are outside shots at taking Murray while they’re on the clock, but I’d imagine they’ll go CB or DT as greater needs in those spots.

Murray would fit in well with the Falcons at No. 16; I don’t see Atlanta passing on him if he’s there. Murray would be an instant upgrade to that defense and a great addition. There’s an outside shot Murray falls to Las Vegas at No. 19, but I doubt he’ll last that long. I’m going to go with Atlanta as the strongest possibility, with Jacksonville, Tampa and Denver being dark horse candidates.